RELEASE DAY: A HEART OF SALT & SILVER by ELEXIS BELL 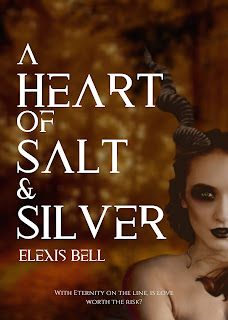 A Heart of Salt and Silver
Elexis Bell
Genre: Dark supernatural high fantasy romance
Date of Publication: 11/3/2020
Cover Artist: Elexis Bell
Tagline: With eternity on the line, is love worth the risk?
Book Description:
Ness, a demi-demon with a conscience, just wanted a peaceful afternoon in the Forest of Immortals. But Elias, a reckless mortal, went and spoiled it. Not that he wanted to be chased by psychotic vampires.
After saving his life, Ness agrees to help him find his estranged father and his Pack. But that means facing Nolan, the werewolf ex that holds her heart.
Now, Ness must decide. Use Elias to forget Nolan at the cost of his soul or crawl back to her ex and hope he still wants her even though she broke his heart.
But in a world sprinkled with immortals, broken hearts might be the least of their worries.
Fans of gritty fiction, compelling romance, and imaginative takes on magic and the afterlife will love this dark supernatural high fantasy romance.
Amazon

“Unhand us, witch!” the vampire shouts.

The mortals, apparently far smarter than this vampire, remain silent. Even the vampire’s own pledge seals his lips shut. A wave of Nether wafts off him, marking him as a Nether witch.

But fury sparks within me, and a dark grin overtakes me. I lower my arm, setting the blades down gently in the middle of the clearing.

“What was that?” I ask, daring the vampire to repeat himself.

Stupidly enough, he does. “I said, ‘unhand us, witch!’ Let us go quickly, and I might not kill you.”

I laugh quietly, and all the birds fly away, deserting their treetop perches. A dangerous glint shines in my eyes as I saunter within arm’s reach.

“Witch? You think me a witch?”

“How else could a pitiful, puny little woman like you do all this?” He jerks his head at the other two men, unable to move his arms. Cheeks flushed with anger, he draws back and spits in my face, dark eyes flashing, all the while.

Nearby animals sense my anger reverberating on the Nether, and the woods fall completely silent. Fury roils within me, and visions of blood fill my mind. Everything in me demands his evisceration.

Or perhaps the removal of some limbs…

With eyes narrowed, I lift one hand. He flinches, and I smile, baring my teeth. His spit floats into the air, leaping happily from my skin. My spine shivers with disgust and hatred as I force the spit to smear itself over the vampire’s face, over his eyes.

Slowly twirling one finger, I tighten his bonds. Air rushes from his lungs, and his soft face goes red as he struggles to breathe.

“You underestimate me. I don’t know a single witch who can do everything I’ve done without at least three days of spell and potion preparation. Not to mention the difficulty of lugging all those ingredients out here.”

Lifting one average looking fingernail to his face, I trace one of his cheekbones, then the other, splitting the skin wide. A line drawn down the center of his nose, from bridge to tip, releases still more blood.

My eyes flutter as the darkest parts of me savor the sight.

“As for spitting on me,” I whisper, knowing my voice will carry to the others, echoing in their bones despite its low volume, “that was a grave mistake. Most of my kind would have killed you on the spot, simply for the disturbance.”

My soul riots for revenge, and my blood boils in my veins. I fight the damnable words, hating my own weakness before my rage, but still, I say, “But ignorance must not go to seed. Your family line will end with you. You will never again create, or prolong, life.”

And I shift the Nether to make it so.

“Your kind? What are you talking about? What makes you think you can curse me?” All bluff and bluster, the vampire tries to appear brave and defiant.

But I feel the fear leaking off him. I smell it in his blood, acrid and spoiled. I hear it in his sputtering heartbeat, slightly more erratic than those of the others.

Again, I say nothing. Drawing a deep breath, I close my eyes slowly.

Thunder roars through the clearing, rumbling in all our chests. I open my eyes, glittering gold sending light reflecting back at the vampire, and my skin grows paler. Fingernails become golden talons, embedded in black skin which reveals hues of purple as it fades to white just above my wrist. My eyelids are colored similarly, pulsing with the Nether that reaches out through my skin.

Black horns burst from my skull, sticking through locks of deepest red. My horns twist as they taper off, curling back over the top of my head.

The color drains from the vampire’s face, concealed as it is by his blood. Sick glee spikes through me.

“Did you know you would feel my revelation in your blood? Did you know the very air would tremble with it?” I ask, knowing the answer to be a resounding “no.”

“You’re a…” he trails off, unable to speak for lack of air.

“Demi-demon is, I believe, the word you’re looking for,” I say, smiling malevolently. “Now, I’m going to untether you, and you’re going to run. Before I change my mind.” 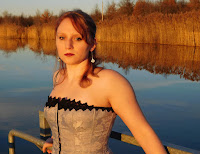 Elexis Bell is a quiet nerd with too many hobbies, including everything from gaming to shower-singing and even archery, weather permitting. She specializes in sarcasm and writing stories that make people feel. She's made a home for herself with her husband, their dog, and a small army of cats. 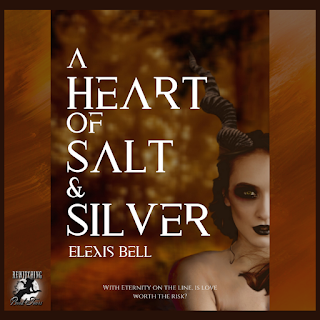