I was shocked to see that the last time I posted here was a year ago. Time flies. My bad. I've been busy working on a few other writing projects that I hope to tell you about soon.

What`s brought me back to this page is a Netflix series called ``DAREDEVIL``. 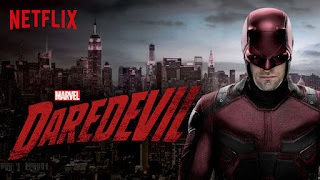 For the record, I`m hit and miss on the assortment of Marvel television series. I liked "Agents of Shield," the first couple of seasons, and I've never liked "Agent Carter," I haven't seen "Jessica Jones" yet. (I know, I know...)

Daredevil though, if you haven't seen it, is darker and creepier than the aforementioned ABC series. Maybe that's because it's on Netflix. I almost made reference to the fact it was internet rather than conventional television, but then again Gotham is dark and creepy, so there goes that theory.

Daredevil alone is worth the monthly $$ for Netflix.

The story revolves around a blind lawyer Matt Murdock (Charlie Cox) who fights crime in Hell's Kitchen. He wants to take down the very shady Wilson Fisk (Vincent D'Onofrio), who controls the city. There are a few people out to get Fisk, including Murdock's partner Foggy Nelson (Eldon Henson) and the surprisingly kick-ass Karen Page (Deborah Ann Woll). Woll might just be even more bad-ass than she was in True Blood. I know! 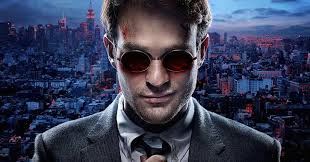 Like all good superheroes with a conscience, Murdock wrestles with how far he should go to rid the city of all the thugs. To kill or not to kill, that is the question. Sometimes the dude makes the wrong choices, that's all I'm saying. And then there's that nagging "secret identity" thing.

I'm a day late watching the premiere of season two, I'm not sure if that's timing, or whether I secretly want to watch them all back-to-back like I did the first season. I do know I'm not going to be able to wait thirteen weeks to do that, so I might as well cave now. See 'ya.

Posted by Janine McCaw at 3:54 PM No comments: