INTERVIEW WITH AVERY KILPATRICK (A Stream of Darkness)

Today we are welcoming author Avery Kilpatrick to our little corner of the world. Welcome, Avery!
SC: Tell me a little bit about your main character of this book.
AK: Luce Lycaon isn’t your average woman being five-two with a bark that matches her bite. Known formerly as the Wolf of Eden and the Renegade after going on a killing spree six years ago, Luce is reformed and works as a consultant for the Paradise Grove Police Department while attending college classes at the local university. In essence, she’s a stressed college student with a kickass job and doesn’t take anyone’s shit. Especially, men who think they can tame the untamable.
SC: It sounds like Luce has some supernatural powers going on. Do you believe in the paranormal and if so, do you have an experience you can share?
AK: I actually do believe in the paranormal despite what my friends may think. (Shh, don’t tell them.) At my university, there was an old dorm that was closed to the public where a spirit/ghost possessed a girl in the seventies or eighties, according to campus rumors. I always got a bad vibe when I passed the dorm and would rather take a less safer route back to my dorm at night.
SC: Friends, who need 'em? Human ones anyway, lol. What titles are you working on now that you can tell us about?
AK: Well, I finished the second book for the Crymsen Crescent series called A Roar of Flames that I hope to give to my editor team within the next few weeks. I’m also working on a separate series that’s currently in the rough draft phase and hope to publish it sometime next year.
SC: Thanks for joining us today. Let's take a look at your novel now.
﻿ 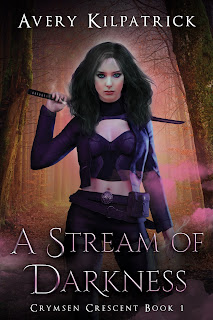 A Stream of Darkness
Crymsen Crescent
Book One
Avery Kilpatrick


A reformed killer, a dragon agent, and a lone shifter must work together to investigate four abductions…

I've always had a close relationship with death.
Six years ago, I was the Renegade, the Wolf of Eden, terrorizing the streets of a small town in Mississippi. Now, after a plea deal that saved my life, I work for the police as a consultant and unofficial cop.
Obsidian Moon, the Underworlder police agency, isn't doing anything about the disappearances of four college women. It falls to my shoulders while I'm stressing over my college assignments and the new transfer who thinks testing my control is a great pasttime.
Then there's him. The mystery shifter who danced with me at a club and reminds me of home.  And he seems to be more than just a random stranger who walked up to an ex-murderer and danced rather than fight.
But I have bigger concerns than two sexy men on my tail as a stream of darkness hangs over Paradise Grove.
The opening of a new series, A Stream of Darkness, will have you guessing at every turn and turning the pages to learn more.
Excerpt:

I sidestepped the ramming bull—well, technically, he was a werewolf—and watched with growing amusement as he slammed into the bar.
As one of the more prominent clubs on the Quad, Mirage was filled to the brim with writhing bodies hypnotized by the pulsing music that resounded from the DJ’s throne. The walls thrummed with the powerful beats and siren acoustics coaxed people into drowning themselves in alcohol. Flashing lights of gold and sapphire, of ruby and amethyst, of emerald and topaz, cast colorful shadows on the clubbers who watched the growing brawl in amusement and fear.
I cocked my head to the side and ebony-gray curls swayed to the left as mint eyes burned like a raging pyre as I watched him stumble to his feet. A Cheshire Cat smirk pulled my lips back over elongated canines that gleamed under the colorful neon lights. “Olé!”
The bar, a mix of black quartz and wood, won this round as it remained unharmed. The werewolf shook his head, the tightly braided red curls bouncing lightly against the left side of his skull. His jade eyes were glazed in confusion and there were flecks of pale yellow from the wolf peering through his gaze as his temper grew shorter. He held a hand to his side and attempted to take a deep breath only to hiss quietly. Though wolves, like most Underworlders, could heal themselves through either magic or blood, it took time to fix fractured bones. His linebacker build didn’t help matters either as he held out another hand to grip the bar to steady himself.
He snarled, a rumbling sound that probably caused him more pain than he let on. Our audience murmured as the less than sober patrons realized that the scar dominating my face wasn’t just any old scar from a run-in gone awry. Flowing from my left jaw to the bridge of my nose, the puckered, jagged scar was as much a moniker as a reminder of my “sin.”
“Mind givin’ me another shot, Izzy?” I drawled, my gaze never once leaving the wolf in front of me as we circled each other.
Izzy was already working on my drink before the last word left my mouth. Her hands flashed after working for years as a bartender on the fast-paced Quad, and she wasn’t at all bothered by the brawl in front of her. “I should be cutting you off, Luce, but since alcohol doesn’t effect you—what the hell, right?”
Pink eyes remained amused as she watched the crowd around us groan while money exchanged hands. She had her long, straight platinum locks pulled into a ponytail as two square strips caressed the sides of her sharp cheeks. Placing the shot glass on the tabletop, she placed a fifty-dollar bill beside it with a good-natured grumble.
I chuckled, and the redheaded wolf took the momentary distraction as a chance to tackle me. Sidestepping him, I placed my hands on his back—barely a brush of my fingertips—and slammed my knee into his abdomen. The crunch of bone and the wheeze of air as a rib punctured his lung reached my ears, and my glittering eyes narrowed as he collapsed at my feet with a groan. Either he was truly a newbie with fighting a petite woman like me, or he was attacking with emotion rather than logical reasoning.
As my father would say, he was fighting for his pride and not for survival.
Heading to the bar to collect my shot, I tossed it back with a hearty sigh as the burn slid down my throat. Without me asking, Izzy refilled my glass, and I repeated the action before slamming the shot down on the bar as stumbling steps reached my ears over the roar of the music and drunken crowd. Sighing, I glanced over a narrow shoulder to see the wolf clutching his side as blood dripped from his bottom lip. He just would not accept defeat, no matter how much bigger a predator I was.
“Look, sourpuss,” I adjusted the fingerless gloves on my hands and rolled the sleeves of my leather jacket to my elbows. Pulling my thick, ebony curls behind me, I continued, “I’d hate to kill your pride in front of all these people, but I’ll gladly do it if you’re raring for a good ol’ fight.”


Glaring at me, he clenched his teeth at the calm indifference in my voice as I was not at all intimidated by his hulking form or the flecks of gold in his eyes. He towered over my five-two frame and I looked like a sixteen-year-old girl with a blunt mouth that got me into trouble, but I wasn’t joking around this time. 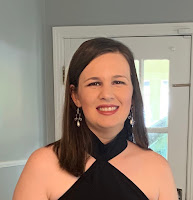 Avery Kilpatrick was born in Flowood, Mississippi, in April 1996. Raised in a small town in the Mississippi Delta, she has a fondness for nature and the cotton fields that create Southern snow pastures in the fall. After writing her first novel when she was thirteen, Avery decided to pursue her dream as an author at a young age.

An alumnus of Delta State University in Cleveland, Mississippi, Avery graduated with a Bachelor’s in English. She also worked on the student-run newspaper, The Delta Statement, during her four-year career at Delta State as copy-editor and Editor-in-Chief.

Avery currently lives in a ranch-style home in her hometown in Greenwood, Mississippi. The mother of three fur babies, Cinnamon the spoiled cat, Ginger the rambunctious old lady, and Remington a.k.a. Remi the service dog, Avery has enough fur from shedding animals to make a fourth pet. When Avery isn’t busy writing her next novel, she goes on walks with her mother and dogs, watches Outlander or Criminal Minds on Netflix, or can be found curled up on the couch with Cinnamon reading a good book.
ASIN: B08DQRLCNC
ISBN: 9798645700447 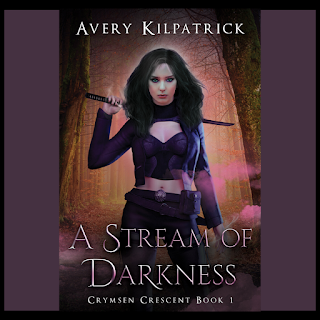