SURPRISE! The Neely Powell ladies have dropped by to have a little chat with us today!
SC: Tell me a little bit about your main character of this book.
NP: Fiona is the youngest witch in the Connelly Coven. She has always been a good girl. She’s a medium, which is a talent no other witch in the family has ever had. Having to deal with the voices in her head and seeing dead people all the time made her somewhat shy, but she found an outlet with internet podcasts. Her show, “Spirit Talk,” became well known and caught the attention of reality-show producer, Bailey Powers. In this book, she finds her independence and believes she can end the family curse.
SC: Do you believe in the paranormal and if so, do you have an experience you can share?
NP: Powell went to Gettysburg, one of the most of haunted places in the United States. A ghost got in bed with her. She rolled over in the middle of the night and opened her eyes, expecting to see her husband. Instead, a pale, pale face stared into hers. She screamed and the apparition disappeared, and her husband jumped out of bed and said, “Stop screaming. Someone will think I’m killing you.”
Neely lived in New Jersey for four years. Her apartment building sat across from a row of warehouses and businesses. She did freelance work and tends to be a night owl. Every night around three o’clock, there would be a flurry of cars going to one of warehouses behind the others. As she was watching one night, what looked like a long piece of fog began falling to the ground. As it fell, it began to take the shape of a woman. Her dress was long and she wore a bonnet, and Neely could see the imprint of her knee as she walked across the grass lawn in front of a business and stepped into the darkness.
SC: What titles are you working on now that you can tell us about?
NP: We are working on “Healing Magic,” the third book in The Witches of New Mourne” series. There are some real surprises in store for readers who think they know who Dr. Rodric McGuire is and what he means to Eva Grace Connelly, the coven’s empath and healer.
Thanks so much for stopping by. Let's take a look at the novel now.
﻿ 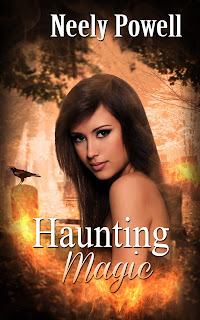 Magic and mayhem bring a witch and a Hollywood producer together…will an ancient curse tear them apart?

Fiona Burns, a witch who sees dead people, meets Hollywood producer Bailey Powers, who sees her as the next cable star—and a fake. Even so, she’s tempted by the dynamic producer in more ways than one. But she has a big distraction—a vicious curse on her family coven.

The ghosts of New Mourne warn of the return of the Woman in White, a vengeful spirit who claims the life of a Connelly witch from every generation. During the battle, Fiona unwittingly fuels the demonic forces, and black magic brings death and heartbreak to her family.

Initially a skeptic, Bailey is soon caught up in her supernatural battle with forces of evil. He’s also beginning to think Fiona can help him escape his haunting past. With magic and mayhem at war and survival on the line, the Witches of New Mourne face a new challenge from their ancient foe. They discover that not all dark deeds are borne of the Woman but a demon who is bent on gaining the Woman’s powers for his own. Will another generation fall? Or does the curse end here?


Haunting Magic Excerpt:
Overgrown weeds covered the back of cemetery. In the deepening gloom, Fiona stumbled over a stump. The baby’s screams filled her head. She had to help this child.
The grave markers in the back of the cemetery were the oldest ones. Some of them were so weathered it was impossible to read the names and dates on them. When they reached the back corner, Fiona knelt. All she could hear was the baby’s cry.
She dug through the weeds and scruff in front of her, ignoring the sting of thorns on her hands. Bailey dug with her, and soon she touched the cool stone of a broken grave marker.
“Baby MacCuindliss” was carved in uneven letters deep in the stone.
“This is the Woman in White’s baby.” Fiona traced the name on the marker with tender fingers. “Please don’t cry,” she whispered. “I’ll try to find your mother, I promise.”
The baby’s cry faded to a whimper. The mist blew away, leaving Fiona and Bailey under a canopy of threatening clouds.
“MacCuindliss,” Fiona breathed. “The Woman’s name.”


Lightning streaked over the mountains, and the ominous stink of sulfur infused the air.

Neely Powell is the pseudonym for co-writers Leigh Neely and Jan Hamilton Powell. Long-time friends, they’re the authors of “The Witches of New Mourne” a paranormal series about a family coven, a centuries’ old curse and an enchanted town.

AWAKENING MAGIC is available from The Wild Rose Press, and now HAUNTING MAGIC continues the story.

Writing as Celeste Hamilton, Jan published 24 bestselling romance novels for Silhouette and Avon Books. Her day job is in corporate communications in Tennessee. Leigh has a long resume as an editor and freelance writer, and is managing editor of a regional magazine group in Florida. 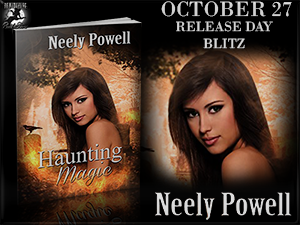