Well now, aren't we the lucky ones to have Acadia K. Parker checking in for a little chat today!
SC: Tell me a little bit about your main character of this book.
AKP: Oh man, where do I start? Emerson Harper is a witch, but she isn’t a very good one, unfortunately. It honestly kind of works out for her, though, because she actually loves owning her own Herbal Shop where she can help create potions and charms of all kinds to help people who come through her door (and she caters to both witches and humans, too). She’s quite knowledgeable about herbs and Stones and gems, but she isn’t always so confident in other areas of her life, which is where she gets herself into some awkward situations sometimes. When she’s nervous she tends to say whatever is on her mind . . . which isn’t always a good thing (but certainly makes for an hilarious encounter)! Thankfully, she’s so sweet, no one faults her for it.
SC: Do you believe in the paranormal and if so, do you have an experience you can share?
AKP: I do, yes! I used to have a lot more experiences with it when I was younger, but it’s very sporadic as I’ve been getting older. The biggest one I experience now has a scientific term called “sleep paralysis” – basically, at some point when I’m dreaming I wake up, but I can’t move or speak (it feels like my body is filled with sand), and no matter how hard I try and move or talk, I can’t. I often see different things – sometimes it’s a room or some kind of obscure material, and other times it’s my room and it’s dark and I feel something there with me . . . and I have to admit, I don’t like it. It can be an extremely scary experience, and it comes sporadically so I never know when it’s going to happen.
I haven’t done a ton of experience with this, but I know there is a documentary on Netflix with others who have experienced this.
SC: That must be discomforting for you. I find that the more open to experiences your are, the more they happen. Which may or may not be a good thing. But I digress. What titles are you working on now that you can tell us about?
ADKP: Right now, I’m working on an entirely different series that’s much darker than Delightfully Witchy! It’s called RECESS, and it was actually my debut novel, but I had some great readers reach out to me regarding some editing errors they discovered. I pulled it some time ago and had it re-edited by a different editor, who made some great points, and will be releasing the novel for the 2nd edition on October 30th.
RECESS is a dark, adult, post-apocalyptic paranormal that follows Avery and her two “brothers” – wolves she met along her travels – as she attempts to survive in no-man’s land in search of the last city standing.
This one is part of a five novel series and ends in a cliffhanger (I know how everyone loves those!) – but I’ve been working on it for years and I’m excited to be done and working on novel two, which I plan on having out late this year or spring 2018! 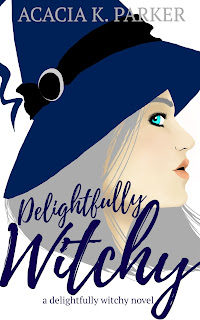 Tagline: Not everyone is good at being a witch.

Looking for true love? Having dreams you need to recall more clearly? How about that pesky curse that just won’t go away? Let Delightfully Witchy Herbal Shop conjure up the perfect charm for you!

Meet Emerson Harper—herbalist, shop owner, witch—exceptional at the first two, not so much on the last. She finds there are perks to living a quiet life, especially when those perks involve Lincoln Summers walking into her shop asking for a rare Stone. Powerful, wealthy, and famous, she finds it hard to resist selling him what he seeks when those dazzling blue eyes of his linger a little too long.

What Lincoln failed to mention, however, is someone evil is looking for the Stone; a witch who now has Emmie in his sights. Luckily, Emmie made more of an impression on the sexy stranger than she realized, and when he comes to her rescue she finds herself suddenly pulled into Lincoln’s world of dark magic and buried secrets.

In the fight to reclaim their lives—and save the world from a deranged witch hell-bent on destruction—Emmie is thrust into a journey of mystery, peril, and self-discovery, only to learn that sometimes . . .

All magic needs is a little push. 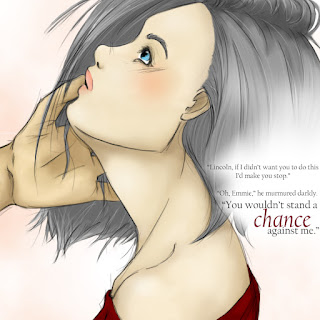 I awoke screaming and scared, feeling like I was locked in that trunk again, bound and unsure of the outcome. I was dazed. I knew I was awake, but it was still hard to tell what was real. I felt the mattress underneath me, and the clothes that smelled of spices and were faintly musky and sweaty. There was a light beside the bed I could turn on to show that I was perfectly safe. None of that mattered, though, because I was frantic, tears falling down my face, trying to get out of the confined space that had me caged in.
Someone was talking to me, calmly and evenly. Whoever it was grabbed my arms and lifted them, moving me so my back was to a chest, clearly not my sister’s. I yanked my arms to get free, but whoever had me was too strong, the voice continuing to speak, telling me I was all right, that I was safe, and there wasn’t anything to be worried about.
“Emmie, it’s just a dream, there’s nothing to be afraid of.”
Lincoln. It was Lincoln’s voice that finally trickled through, and I realized where I was. He had his arms wrapped around me, holding me still so I wouldn’t hurt myself—or him, for that matter. My head was somewhere near the crook of his neck as I craned it back, looking up at the black ceiling, its endless depths forbidding and ominous. Tears fell, my breathing was labored, and my heart raced. He never moved, even as my legs kicked the blankets away, hating myself for allowing this to happen.
When I finally got myself to calm down, Lincoln turned me and without a word pulled me into a hug. I wrapped my arms around his waist, listening to his heartbeat as it hammered violently in his chest. With his head resting on mine, I barely felt the stubble scratching at my forehead, abrasive but welcome.
“You scared me.” His voice was throaty, like he’d just woken up himself. “Are you okay?”
“I think so,” I managed to say, pulling back, noticing the light on the nightstand was on, dim in the darkness. “I’m so, so sorry. That was—”
“Expected . . . considering.” He shrugged, his hand on my shoulder as I wiped the tears off my face.
“I guess it’s a good thing I don’t sleep naked,” I giggled, trying to lighten the mood.
“I think that depends on who you’re asking.” He smirked.
And I blushed, of course. I was feeling all warm and cozy with his hand still on my shoulder and then I noticed he wasn’t wearing a shirt. Good Lord. Trust me, it was everything I ever thought it would be. No, it was definitely better. He was perfect; chiseled chest, washboard abs, thick arms, and a dark line of hair leading from his belly button until it disappeared underneath his pajama pants. I’m pretty sure if I kept looking I was going to start drooling, literally, and that would be . . . just no.
“What are you thinking about?”
“Nothing! It’s nothing.”
“It doesn’t look like nothing,” he said, raising his brows.
“It’s not important,” I answered nervously, biting my lower lip.
“Are you sure?”
“Yep.” I nodded. “I’m sure.”
“Ok.” He squeezed my shoulder lightly. 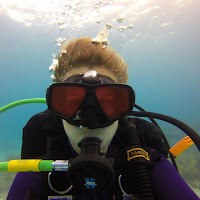 Acacia has been what some may call a "gypsy" for most of her life. With her father serving in the Air Force for twenty years, she's enjoyed many different homes in many different states, with a decent portion of her life lived overseas in Germany. Always one to be creative, she has been drawing since she could write, and writing has become a passion of hers since her teenage years where she discovered she loved telling stories and creating eccentric characters.

Currently residing in Phoenix, AZ with her husband Shawn and their two golden retrievers, Boomer and Sookie, the duo find any excuse to enjoy the weather (when it's permitted), and you can often find the them scuba diving (their favorite place is the Florida Keys), hiking, visiting one of the many beautiful lakes Arizona has to offer or finding winding, dirt roads to discover. Unfortunately, it's not all fun and games. A good chunk of Acacia's time is taken up to complete her Bachelors in Business Management at Grand Canyon University - although procrastination does ensue.

In her writing adventures, Acacia hopes that one day her stories may inspire others to follow their dreams - no matter how crazy they may seem.