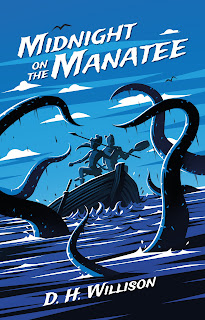 Midnight on the Manatee
D. H. Willison
Genre: Fantasy adventure/fantasy romance
Date of Publication: October 28, 2022
ISBN: 9798823112536
Number of pages: 182
Word Count: 33K
Cover Artist: Papaya-style
Tagline: Life-and-death adventures on a creepy fantasy world blend with wit, whimsy, and a generous dash of romance.
Book Description:
How does the steamship Manatee navigate sea-monster infested waters? What sacrifices do her grand profits demand? The only certainty, is that the Manatee casts a dark shadow everywhere she makes port.
Brianna, a tough, no-nonsense human, yearns to escape stifling big city rules and a troubled past. A quaint seaside town seems perfect to start a new life—until she wakes up aboard the Manatee. As cargo.
Shard, nekojin feline of the forest, dreams of sailing to distant lands—to the horror of his friends. When his intriguing new neighbor, Brianna, disappears and all signs point to the mysterious Manatee, he’s certain this is his moment for high seas adventure. Yet with skills tailored to the forest canopy, his rescue goes disastrously awry.
Their only chance of freedom is to work together, but can their budding relationship overcome ruthless smugglers, corrupt officials, and a slew of ravenous monsters? Or are they destined to take the secret of the Manatee to a watery grave?
Midnight on the Manatee blends life-and-death adventures on a creepy fantasy world with wit, whimsy, and a generous dash of romance.

I’ve always struggled picking out clothes. It doesn’t matter if it’s for travel, work, or a special event, I seem to hit a point where I regret my choices.

Late afternoon sun glared in my eyes, the wide brim of my slouch hat unable to shield me. Mostly because it was on the ground a dozen paces distant. It was hot, and this close to the marsh, humid too. My linen blouse was drenched in sweat, though a breeze provided a modicum of relief from the heat—that part, I’d gotten right. The leather traveling vest was well-vented, my padded breeches also a good compromise between comfort and protection. But my boots were clearly wrong. Light beige leather with flexible soles prioritizing comfort over armor seemed a good idea for the long trek between Halamar and Barricayde.

But the bog toad with its jaws locked around my right ankle seemed intent on demonstrating the error of my ways.

It was half the size of a coach, with an underbite and stubby tusks thick as my legs. I kicked it with my free foot as it shambled backwards, dragging me toward the marsh. Vision blurry from sweat streaming into my eyes, I squinted, trying to sight along the barrel of my single shot pistol.

One shot. At this range I can’t miss.

I fired, the pistol belching gray smoke and a dull wumm.

The toad lurched back, blood oozing from an apparently non-critical wound. It blinked a pair of fist-sized ruby eyes, lunged at me again, this time snapping both legs up to my knees in a maw as broad as my arm span.

How did I let a minor predator ambush me? Along a marked path! Big city’s making me soft.

No! I will not die to an oversized frog. I shoved the pistol in its holster, unfolded my collapsible spear with a metallic klink, jabbed it at the creature’s head. A head which seemed to comprise half its mass. The third strike to its thick hide found a sensitive spot: it spat out my legs, sneezed a blob of mucus and blood on me, and shambled back into the marsh.

I stood, yelped in pain, collapsing to my knees again.

Those critters might not have sharp teeth, but they bite hard.

First things first: I reloaded my pistol. It may have been as effective as poking a troll with a toothpick, but it was my toothpick, and it was gonna be loaded.

I pulled off boots caked with blood and saliva to reveal a souvenir of the encounter: bruises from ankle to mid thigh.

Should have worn armored boots. Blood or mucus colored armored boots would have been ideal. But on the bright side, none of the blood was mine.

“It’s a well-traveled path. You can wear comfortable traveling clothes, no need for armor.

Owww. You’re an idiot, Brianna,” I muttered, managing to stay up on the next attempt.

“Hope they have a decent healer in Barricayde. Not to mention a laundry.”

Murky water burned my eyes as my feet sank into the mud. The caprid in my arms flailed and kicked, I could feel its chest heave in panicked breaths. “Juro, a little help?” I called.

“I am helping. I’m watching out for predators.” Juro crouched atop a low branch of a live oak tree, gaze darting between trees and clumps of reeds. He grinned. “None here. You’re welcome.”

“I meant, could you grab the other two trapped caprids.”

I waded ashore, set the waist-high, hoofed creature next to its flockmates, hoping the presence of the herd would calm it.

“At least keep the flock from panicking while I get the other two.”

Juro bounded from branch to branch, finally settling on the ground beside me. He had auburn fur, stood a tad shorter than me, his tail shorter as well, and lacking the white puffy tip he made fun of when we were growing up.

“If we leave them out here,” he said, “our neighbors might learn a valuable lesson about the merits of proper animal husbandry.”

“The creatures horns are blunted, they cannot defend themselves against predators and would most likely be devoured by bog toads before the humans were able to recover them all.”

“Which would certainly be a valuable lesson, Shard. Hurt what they value most.”

Juro didn’t need to complete the thought. We all knew what that was. “It would indeed hurt their coin purse, but caprids shouldn’t pay the price to do so. The creatures are innocent.”

“Didn’t you want to visit the bookseller this afternoon? New volume of that pirate series you’re always talking about.”

I dove back into the stagnant green-brown murk at the edge of the marsh, swam around the last two stragglers, managing to shoo them toward the herd without having to carry them.

I spat, trying to clear the taste of marsh water from my mouth. Mud, slimy strands of algae, and decaying vegetation plugged my nose, clung to my ears, obscured my normally keen senses. But I wasn’t worried, Juro was a rascal, but he’d have my back at the first hint of danger.

“Yes. It’s supposed to be out today. But after all that effort, we can’t leave the task unfinished.”

Juro shrugged, but helped guide the flock toward the shepherd’s day shed.

We encountered the herder’s daughter a few minutes later, sprinting toward us, a wooden crook in her hands, single shot rifle slung across her back.

“You’ve found them, thank you!” She huffed heavily, her armor and gear sized more for an adult human than an early teen.

She mumbled, pointed at the creatures with an index finger as she counted. “All here. My stupid little brother needed help with…” She shook her head. “It’s not important. I’d like to thank you, but I don’t have my coin purse with me. Come with me to the day shed, maybe there’s something there.”

“It’s OK,” I said. “I’m still hoping to make it to the bookseller today.”
Juro snorked. “Looking like that? The humans won’t even let you through the city gate! You’ll be lucky if they don’t mistake you for a swamp monster and hunt you.”

“Good point.” I turned to the girl. “How about a few buckets of fresh water, some rags, and a brush?”

She smiled. “Deal.” She moved to clap me on the shoulder, hesitated, backed off half a step. “Maybe after a bath.”

D.H. Willison is a reader, writer, game enthusiast and developer, engineer, and history buff. He’s lived or worked in over a dozen countries, learning different cultures, viewpoints, and attitudes, which have influenced his writing, contributing to one of his major themes: alternate and creative conflict resolution. The same situations can be viewed by different cultures quite differently. Sometimes it leads to conflict, sometimes to hilarity. Both make for a great story.

He’s also never missed a chance to visit historic sites, from castle dungeons, to catacombs, to the holds of tall ships, to the tunnels of the Maginot Line. It might be considered research, except for the minor fact that his tales are all set on the whimsical and terrifying world of Arvia. Where giant mythic monsters are often more easily overcome with empathy than explosions.

Subscribe to his newsletter for art, stories, and humorous articles (some of which are actually intended to be humorous). 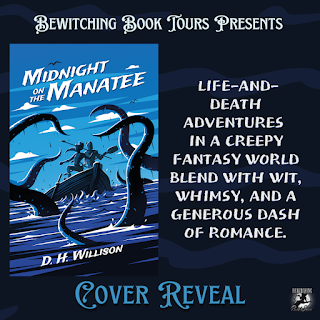