October is such a busy month for our crowd. We're thrilled that author Timothy Patrick Means had a chance to stop by and answer our three fave questions. Welcome, Timothy!

TPM: The 16-year-old girl disappeared after school on an October afternoon. The police have exhausted all leads. It’s been weeks, but her mother, Barbara, will not stop searching for Melissa.

Her husband, Mark, has given up…and started drinking. Her younger daughter Rachel feels neglected. The police think she is a nuisance. Her job is in jeopardy.

But even more, mysterious things begin happening around Barbara. The shadows that have no source…a dark form, glimpsed beneath Melissa’s bed…the ravens that have assembled on the lawn.

Desperate, Barbara turns to the mysterious Sterling, a man the police scorn as a psychic, a fraud, and maybe worse.

Can Sterling help Barbara find her daughter before it is too late? And what is the mysterious Bishops’ Curse that has haunted Barbara’s family for centuries?

SC: Shadow figures, they're never fun. Do you believe in the paranormal and if so, do you have an experience you can share?

TPM: Yes, unquestionably, they have existed from the beginning of time. I had family come up and visit me back in Wichita, Kansas. My family roots began in Kansas, and they wanted to see some old family stomping grounds. We travelled to an old, deserted town with only one post office and dirt roads down the central part of town. My elderly aunt recognized a house that my grandfather built, and we all went inside. There I could see my aunt becoming troubled by her memories as a child. She excused herself and walked out of the house, troubled.

My cousins and I searched the house and went upstairs. While my camera was snapping away, I heard my cousin asks his sister, “What,” he replied.

She laughed and said, “I didn’t call you?”

“I heard someone call my name. Are you sure it wasn’t you? Next, he turned to me and asked, “Did you call me?”

“It wasn’t me,” I responded. The next thing I knew, they were running downstairs, leaving me alone in the house.  Here is the actual picture I took.

SC: Thanks for sharing that! What titles are you working on now that you can tell us about?

SC: We love pirates around here!

TPM: I’m also finishing details on Book 2 of The Bishops’ Sacrifice, titled The Family Curse. It will be out in February of 2022.

I also have a book on Vella, The Sterling Chronicles, which gives the back story on one of the characters, the psychic detective,  in The Bishops’ Curse series.

SC: Thanks so much for chatting today. Let's take a look at Demon Shadow now. 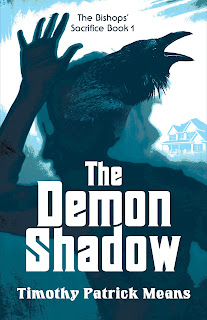 Demon Shadow
The Bishops’ Sacrifice
Book One
Timothy Patrick Means
Genre: Horror
Publisher: Mad Dog Press
Date of Publication: 10/01/2021
ISBN: 978-1-7376017-0-8
ASIN: B09CVSKR4P
Number of pages: 179
Word Count: 47831
Cover Artist: Eric Labacz
Book Description:
The 16-year-old girl disappeared after school on an October afternoon. The police have exhausted all leads. It’s been weeks, but her mother, Barbara, will not stop searching for Melissa.
Her husband, Mark, has given up…and started drinking. Her younger daughter Rachel feels neglected. The police think she is a nuisance. Her job is in jeopardy.
But even more mysterious things begin happening around Barbara. The shadows that have no source…a dark form glimpsed beneath Melissa’s bed…the ravens that have congregated on the lawn.
Desperate, Barbara turns to the mysterious Sterling, a man the police scorn as a psychic, a fraud, and maybe worse.
Can Sterling help Barbara find her daughter before it is too late? And what is the mysterious Bishops’ Curse that has haunted Barbara’s family for centuries?
The Demon Shadow is the first in a series of haunting thrillers that will keep you on the edge of your seat.
Amazon

She hurried down the hallway with the crystal in her hand. As she passed Melissa’s bedroom, the crystal began to glow brighter and brighter. Pausing just outside the door, she stopped and didn’t move. The crystal burned with such intensity that she could hardly look at it.

She held her palm flat, the object resting in the center. She was compelled to walk into Melissa’s bedroom. As she took a step inside, the crystal’s light became blindingly bright, reaching into the darkest corners of the room, filling every murky space with beams of shimmering light. She realized with a shock that she hadn’t turned on any lights; the object glowed more brightly with each step she took.

As she stood silently, watching the effects of the light against the blackest of the shadows. Something moved! Frightened, she wanted to run away but instead stood transfixed as a pair of long, bony arms reached out from under Melissa’s bed.

Somehow, she knew that the dark, shadowy figure was trying to crawl from some other place into this world. As she watched in silent horror, it slowly pulled its body upward from under the bed. A dark and menacing fog swirled and grew until it assumed the shape of a tiny human skull with two bulging eyes embedded in deep sockets, eagerly watching Barbara with keen interest.

Frozen in fear and unable to move or retreat, she stood perfectly still. The dark body changed, blending within the blackness in front of her—this thing was death itself.

Slowly, it rose from the floor and became erect— alive. The air in Melissa’s bedroom was becoming frigid, and Barbara shivered in the sudden cold. All she could do was to stand immobile and watch intently as the apparition came to life.

The body of the ghastly image was almost transparent, with dark, oily skin. Now that it was upright, Barbara could see that it stood close to six feet tall with a body as black as a moonless night.

The creature unfolded two broad, enormous wings; they stretched halfway across the room. To her horror, it opened its mouth wide and let out an ear-piercing scream as if it had just been wounded. Flinching, she clamped her hands over her ears.

Questions flooded her mind. Why is this creature here in Melissa’s bedroom? What can this all possibly mean? Only one thing mattered: How could she defeat this creature that threatening her life?

The answer to that question, she realized, was in the palm of her hand. As the dark demon fully materialized, the small object she held burned ever more brightly. As the entity grew in strength and magnification, the burning brightness in the room increased as well. Somehow, she understood that this object was inflicting the pain the creature felt. Was kind of weapon was it?

More importantly, if this small object caused this beast such enormous pain, how could she use it to defeat the monster?

The light restrained the creature, but it fought against it. In one final attempt to get at her, the creature stuck out its long, skeletal fingers; its razor-sharp nails tried to stop the incandescent light from penetrating its hazy body. Still, every time it drew closer to harm her, the shining brilliance from the crystal object became even brighter and held the creature back.

Inside herself, something suddenly changed; she would not surrender to her fears. She would show this creature no mercy or weakness. She stepped toward the being, holding the light before her. As she did, the creature’s menacing shape began to change. It was no longer the threatening being it once had been, and it began to draw inward. Its once proudly displayed wings collapsed into its body. Its form seemed to lower in submission; the strange creature looked as though it bowed before her.

The incandescent light from the small crystal penetrated deep into its dark body as it began to creep backward under Melissa’s bed, retreating into the world in which it lived. As it withdrew, it took on a much smaller form than before.

Her courage renewed; Barbara took another step closer. As she looked upon the inky body, it shrank to nothingness and disappeared from her sight.

She took a deep breath. It was gone. But she knew it had only been subdued for now. It had had no choice but to retreat to the abyss of its home, in that other world where darkness lived.

But it would be back?

About the Author:
Timothy was raised on the sunny beaches of Southern California. As a young boy, he spent many summers swimming and playing in the ocean without care. Later as the man, he was fortunate enough to land a job in Aerospace, working for McDonnell Douglas. There he worked on military aircraft and, most exciting of all, rockets! All types of space hardware, including the space station, space shuttle, and the Delta rocket.
His life has always been interesting—a father to four children and two stepchildren, Grandfather to 14. He’s given away his heart to all. In his life, he’s always loved writing. His first experience at being creative was describing his feelings through poetry that seemed to get mixed emotions. But it wasn’t until he put pencil to the paper that his imagination soared, and he was set free to explore all the possibilities of creating an exciting story.
Here and now is the result of his work. A new world created from his imagination, where everything was possible, including the dangers and pitfalls.
https://sacrificetheinnocentsbooks.com/
https://twitter.com/TimothyMeans17
https://www.facebook.com/tmaddog38 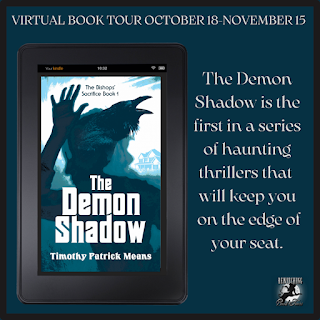