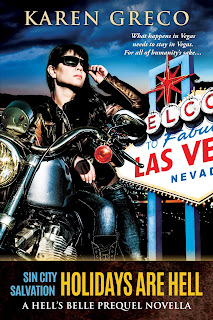 Tagline: What Happens In Vegas Needs to Stay In Vegas

There are thousands of bodies buried in the Las Vegas desert. Nina Martinez does not want to be one of them.

Blood Ops agents Nina and Frankie came to Las Vegas for a little R&R. But their holiday takes a detour when there is a mass suicide on the Vegas strip. With the sigil of Satan burning on the bodies, what looks like a human problem quickly turns supernatural. Satan is in Sin City, and he’s been reinvented as the self-help guru behind the multi-billion-dollar organization BestLife Ministries.

With an offer to attend the BestLife’s Yule Ball, Nina accepts her invitation to dance with the devil. But what happens in Vegas needs to stay in Vegas. For all of humanity’s sake…

This action-packed prequel novella to the acclaimed Hell’s Belle series gives fans of series a glimpse at Nina’s origin story while new readers can sample the unique Hell’s Belle world.

Karen Greco’s entire career has revolved around writing. She studied playwriting in college (and won an award or two). After not writing plays for a long time, a life-long obsession with exorcists and Dracula drew her to urban fantasy, where she decapitates characters with impunity. Titles in her Hell’s Belle series include: Hell’s Belle, Tainted Blood, and Steele City Blues. Sin City Salvation is a prequel novella to the series. She wrote contemporary romance for a small press under the pen-name Jillian Sterling. She is currently re-writing and expanding those books for re-release. She is a freelance entertainment publicist and feature writer. She is a regular contributor to Providence Media’s various regional titles.