It's a busy day here at Supernatural Central. Get a big cup of coffee and sit down because Denise Marques Leitao has dropped by to answer our three fave questions for us. Ready?

DML: Karina. She’s 14, and she likes math but she’s bad in English, French (cause I imagined her living in Montreal) and social sciences in general. She doesn’t like questions without clear answers, meaning that she lacks interpretation skills. But she works on it.  She’s not great at verbal skills either, but that’s something that she obviously can’t improve in the course of one book. I think she’s also a loyal friend

DML: Oh, I was born in Brazil. Are you kidding me? I’ve seen people incorporating spirits, people talking to spirits. I’ve also seen things. But I don’t think these things are paranormal, I think they are part of our world, in a sense. Sometimes I think it’s just residual energy forming images. I’m not sure I believe in ghosts, even though I believe in spirits, which is odd. One experience I can share is that, when I was a kid, I played with a glass. It’s like a ouija board, but with a glass turned upside down and letters (any kid could do it, and of course we did it). The glass moves, but we have to touch it. I sometimes think it’s only the people’s energy moving it. We used it to answer questions, but it never answered anything decent. Anyways, it’s super ridiculous. Even if it was a spirit, how would they know anything about us?

SC: I had a Ouiji board as a kid. Funny how they are so taboo now. Different times, different toys I guess.  What titles are you working on now that you can tell us about?

DML: I’m working on getting the word out about Karina’s Silver Shoes.

SC: That's a big job in itself, for sure. I'd better let you get back to it. Thanks for dropping by today. Let's take a look at the book.
﻿ 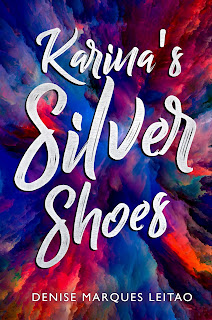 Tagline: She’s got the fate of a kingdom in her hands—or rather, in her shoes.

When two princesses ask Karina to go to Whyland, a kingdom in a parallel dimension, to destroy her fascinating and potentially evil silver shoes, of course Karina accepts. Who would refuse a free trip to an alternate world?

Advised by a wise master and threatened by a beautiful stepmother, Karina goes on a journey with a princess to defeat a powerful witch. But Whyland is nothing like she expected. Karina finds herself stuck in a kingdom she doesn’t understand, with no clue on who to trust. Before saving anyone, she’d better save herself—if she figures out how.

From Brazilian / Canadian writer Denise Marques Leitao comes Karina’s Silver Shoes, a teen parody of fantasy and fairy-tale tropes with many female characters, friendships between girls and women, and some subtle romance.
If you like to read about strong girls and women, you’ve found your book.

Karina just stared in amazement. After the so-called genie, now it was time for two princesses. Special shoes can really make one feel important. In the dim glow, all she could see was their shapes, their dresses and their dark hair. The situation was too strange to be real, but too real to be a dream. She didn’t know what to make of this visit, and had no idea where that light was coming from. She looked around puzzled.
“What’s with the orange glow?”
The room fell dark.
“What orange glow?” a voice asked in the darkness.
Some nerve these girls had. The light from the window would have been enough to make shapes distinguishable in the dark, but not right after a light had been turned off. Still, Karina knew her room well enough to walk up to the switch on the wall, almost stumbling on the older girl on her way, who let out a gasp.
Now clearly visible for the first time, the girls were simply two normal looking teenagers. They had the same very dark brown hair, but looked different. The older girl, Cayla, who seemed to be about fifteen or sixteen, had sharp facial features and her dress was actually yellow. In a plain blue dress, not green, Ayanna had a pleasant round face with bright eyes. She seemed to be around twelve.
“What are you doing here?” Karina asked.
Ayanna jumped ahead and started apologizing, talking fast, “We’re really sorry, we didn’t mean to disturb you, it’s important, we need your help, it’s the sh—”
“Pssst,” Cayla interrupted.
“Let her talk,” Karina said.
But the younger girl just looked down and remained silent.
“Continue,” Karina urged.
“Right.” Ayanna looked at her sister, who nodded, then took a deep breath and started, “Sometime ago, a day or two, the witch came here.” She talked fast, almost stumbling on her own words as she went. “We think she came here, to this room, and talked to you. We think she wanted her shoes, we think you still have them, and if she gets them, it is bad, like, really bad, the end of the world.” Then she breathed again.
End of the world? Witch? A day before? That was not making much sense. The girl’s fear and urgency were probably contagious, because Karina started feeling a chill in her stomach as she sat on her bed.
Cayla crouched in front of Karina looking right in her eyes, and asked, “Do you still have the shoes?”
“Yes.” It was no occasion for lies. “But, no. I mean, the only visit I received was tonight, and she didn’t seem to be a witch. I mean, I don’t know, but still, it was a little less than an hour ago, not yesterday.”
Ayanna whispered to her sister, “The time difference, it’s greater than Odell thought.”
“Yes,” Cayla replied and turned to Karina. “So you’re saying she came tonight?”
“Yes. But, I’m not really sure she’s this witch you are talking about. She seemed really nice.”
Ayanna rolled her eyes. “She had to seem nice! She’s cunning.”
“We followed her path to get here, so we know it was her,” Cayla said. “Was she really convincing?”
Spot on. Karina nodded. She remembered with embarrassment her delight at the opportunity of making a wish. But one thing bewildered her. “If she’s evil, why didn’t she take the shoes?” 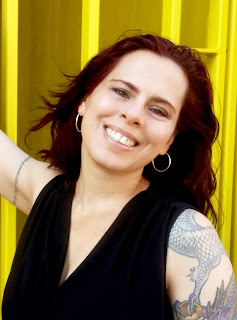 Denise Marques Leitao was born and raised in Brazil. When she’s not creating worlds and characters, she’s discussing the meaning of the Universe with her son, writing unintellectual poetry, podcasting about popular culture, or teaching. She lives in Montreal, Canada, and has a Master’s in English Literature.