Hey, hey, hey... another great day. We've got an interview with today's author to start things off. Let's give a big Supernatural Central hello to Sarah E. Stevens!


SES: Julie Hall is a librarian and a single mom who thinks her life is pretty normal until her baby Carson turns into a Werewolf. In Dark Moon Wolf, the first book in this series, Julie walks into Carson’s bedroom in the middle of the night to find a wolf pup in his crib. That launches her into a paranormal world she never dreamed could be real. In Waxing Moon, Julie has to save herself and her six-month old baby from a group of rogue paranormal fire creatures who want to kill them. She’s kind of an everywoman who’s driven to extreme bravery to protect her son. Like many of us, Julie draws strength from her good friends and, well, she doesn’t always make wise choices with men. She’s strong and determined to hold her own as a mere human fighting against paranormal enemies.
SC: Those paranormal enemies can be a challenge, for sure. Speaking of the paranormal, do you believe in the paranormal and if so, do you have an experience you can share?


SES: I’ve never had a paranormal experience. A huge part of me wishes that magic were real—secret doors to strange lands, magical powers, mythical creatures. I think that’s why I like urban fantasy and paranormal novels so much. I can identify with the characters, because they live in our world. And I can imagine what it would be like to round a corner and bump into a pixie, a Werewolf, or a magician.


SC: What titles are you working on now that you can tell us about?
SES: I’m working on Rising Wolf, working title for the third book in my Calling the Moon series. Hopefully it will release next spring or early summer. Who do you think Julie will end up with: Team Wolf or Team Salamander?


SC: More of a canine fan myself, so I'll go with Team Wolf. Thanks for stopping by to chat with us today. You're welcome back anytime! Let's take a look at Waxing Moon book two now... 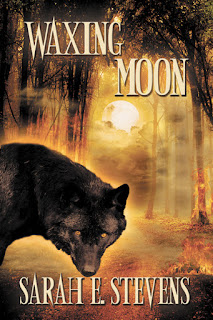 Julie Hall thinks she has the hang of mothering her Werewolf baby Carson, until the night she wakes to frantic barking and finds her house on fire. Arson. Paranormal fire creatures want to kill Carson—and an unknown Were may be helping them.

As if fire-spawning Salamanders and a mysterious Werewolf aren't dangerous enough, Julie soon faces even closer threats. Her trusted friend Eliza harbors a secret and Julie’s new understanding of Werewolves threatens to tear apart her team. Meanwhile, her relentless enemies will burn everything in their path, if they can’t get to Carson.

Will Julie’s efforts to protect Carson do more harm than good?

I jolted awake because of the barking—deep barks that sounded right next to me even though I slept alone in my bedroom. I sat up before I opened my eyes and even then, my brain lagged behind. For the first few seconds, I stared at the flames before understanding my house was on fire.
My house was on fire.
Carson!
The curtains at my window burned, flames shooting up toward the ceiling. I stared at them and almost forgot to move. Then panic poured through me and I jumped up. I felt disoriented: the blackness, the flames, the smoke beginning to fill the room, the roar. My heart raced in terror.
My baby was in this fire.
With a high-pitched crash, my bedroom windows exploded from the heat, and a shower of hot glass flew into the room. I reflexively turned away, arms raised to cover my face. Some of the glass hit me, hot stings against my arms and side, but I barely felt the pain. Below the thunder of the fire, I heard the smoke alarm sound a futile warning.
I didn’t think to drop to my knees, to detour into the bathroom for a wet cloth, to crawl to Carson’s bedroom. Instead, I ran through the house, breathed in the choking smoke, felt my hands and feet start to numb from panic.
Fire filled the hallway to Carson’s room, and I skidded to a frantic stop, unable to reach him.
Carson!
My throat so raw from the smoke I couldn't even scream his name. Heat pounded down the hallway, along with thick black smoke, and flames blocked his door.
The window! Maybe I could get to him from his window, from outside.
I whirled, stumbled, and ran back down the hallway. The fire seemed to chase me until my numb feet tripped on the edge of the area rug and I fell hard, sending a stab of pain into my arm where some glass stuck.
Landing, I remembered I should stay on the floor. The air was slightly clearer down there, and I crawled the last feet to the front door, lined by small paned windows shattered by heat. Glass pieces bit into my knees as I reached the door, the doorknob hot in my hand as I turned it.
I launched myself onto the front stoop, then forced myself off the ground to run around the side of the house. Flames snaked upward toward the roof; the siding below was a mass of char. How did the fire erupt so quickly?
I ran to Carson’s window, now a gaping wound in the siding framed by jagged pieces of glass. The eaves above sang with rising flame and sheets of smoke poured off the lower walls. My bare feet sank into mud, deep mud, and I paused for a second, confused because the water didn’t make sense.
I shook my head to clear it. Carson. I had to get to Carson.
I tried to knock out the rest of the glass on the window frame, before I pulled myself up and over the window. My eyes searched for my baby against in the darkness—thank all the gods! Somehow, there was no fire in his room. I landed heavily on the carpet. The floor was wet and cold shocked my skin. I didn’t have sprinklers—what the hell? I sloshed through inches of water and finally reached Carson’s crib.
He cried, which meant he was alive, and my heart leapt. Tears streamed down his face and his mouth opened in a howl. I grabbed him, held him fiercely and maybe a little too tight, but he grabbed me right back with arms and legs, burrowed into my body, rubbed his face into my shoulder. He was soaking wet from tears.
Or—
Something cracked overhead and I leapt back toward the window, swung my legs up and over the sill, and dropped down into the mud. I landed heavily on one side with Carson cradled against me and pain stabbed through my hip. Holding Carson to me with one arm, I crawled as far as I could—which wasn’t far—then collapsed onto the ground.
I looked back at my house. Fire blazed on the roof. Carson still cried; I cried. We both gasped for air. We were black with soot, with ash, with mud. We were soaked. I was suddenly freezing. Nothing made sense.
Then a growl came out of the darkness and chills raced up my spine. I sat up and turned to see what my body already knew. A huge, black wolf. A Werewolf—it had to be. Only Weres were that big. But who was he? Why was he here? The wolf stood mere feet from me with hackles raised and mouth half-open. Red light from the fire reflected off his teeth. He crouched, muscles taut, ready to spring.
“No!” I shouted and clutched Carson to me, a surge of anger giving me strength.
Why would a Were attack us? 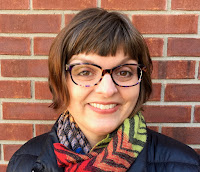 Sarah's love of reading, writing, and all things fantasy started with her childhood explorations of Narnia, Middle Earth, and Pern. She's a huge enthusiast of all fantasy, paranormal, and science fiction. She's a board game geek, an artist, and a dabbler in making chainmaille jewelry. She loves to write about strong women and their friendships--combined with magic and love, of course.

PS. None of her kids are actually Werewolves. 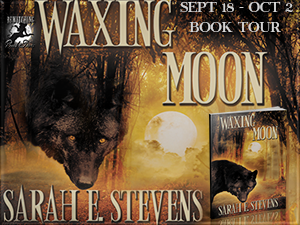