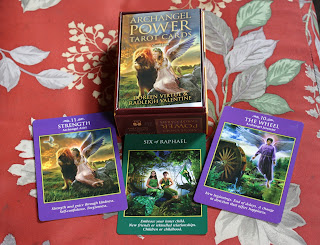 Lately I have been doing readings with the Archangel Power Tarot Cards by Doreen Virtue & Radleigh Valentine. I purchased them at Chapters for just under $20 Cdn. My local Chapters actually has a fair selection of tarot cards. I know a lot of people swear by the traditional Rider-Waite cards just don't do it for me. III wanted something a little more modern, a little more upbeat.


This particular collection comes in a sturdy little box, complete with 78 sturdy cards and a nice 183 page booklet that will get you on your way. The major arcana cards are represented by Archangels that any fan of the tv show Supernatural will recognize. Some of them are on more than one card because as Archangels, their work is never really done. Or there aren't enough of them. I'm not really sure.
The minor arcana cards fall under the realm of four Archangels. Gabriel represents the traditional suit of wands, looking after the fire element, although the elements don't really play much of a part in this deck. Raphael takes over the cup duty (water), Michael and his sword represent air, and Ariel brings down the pentacle (earth) house.


Got it? So here's how I feel about the deck having had the cards in play for a while:


v  The messages are uplifting. No heavy undertones here. No doom and gloom. This makes it excellent for group inspirational readings or for people who are leery of the tarot in general.


v  The groups are colour coded making them fall easily into their groupings.


v  The book is great for beginners. While the cards themselves are printed with messages, the book goes into more detail for each card.


v  The book explains how to clear the cards of prior energy.


v  The book outlines simple layouts to get you going. 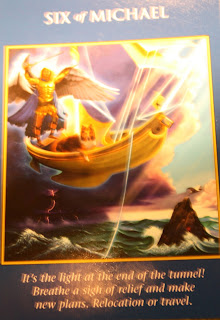 Six of Michael? Six of THOR!


v  As many people have pointed out, the illustrations are…well…weird. The drawings are well done, but someone decided to insert photographic images (of Virtue and Valentine et al?) onto some cards for a rather laughable ego trip. For the love of God… why? 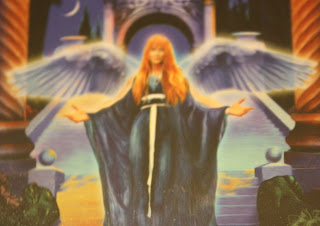 Doreen...is that you? Who died and made you High Priestess?


v  Which brings up another point. God. Angels are what they are. I like them, but if not, take your chances and refer to them as spirit guides.


v  Multicultural? Not so much. Rainbow? Not so much. My secretary Ms. Google says a few cards that were perceived to be gay oriented were redesigned in subsequent issues. Apparently a man cannot put his hand on another man's shoulder. At least not in this realm.


v  Size. The cards themselves are a bit big for my hands. When cards fall out of a shuffle, it's sometimes hard to tell whether that is part of the message, or whether I'm just not coordinated enough for them.


This is the only Virtue-Valentine designed deck that I currently have. And while I actually find it quite fun, Ms. Virtue has come out and denounced tarot cards, having presumably made some serious pentacles with them over the years if you get my drift. So I'm not in a rush to buy anything else from this design team anytime soon. Hence, no link to a buy site. Go figure. The angels will be in play here on Supernatural Central for a while longer, then they will be taking a well deserved vacation until at least Yuletide.
Posted by Janine McCaw at 12:00 AM