Shameless promotion weekend here for moi. It's Thanksgiving weekend for those of us in Canada. Thanksgiving is kind of a strange holiday in that it's in October for us Canucks, but in November for the Yanks. Someone made that decision a long time ago, and for now we are stuck with it.

For those of you who have read the first book in the series, Helens-of-Troy, you know it happens on Halloween. The series follows the American calendar, but Canadians can take some comfort in the fact that this weekend, the eBook of the sequel is now available! So excited. If you missed the first book, you can click on the icon to the right and get your freebie. That's right, I said freebie. For the FIRST book.

The sequel takes place a month later when things are just beginning to settle back down in the town of Troy. Helena's working hard at her naturopath office, Helen gets a job at the police station with Helena's ex, and Ellie gets a job at the Topaz working with her frenemy Tara. Then all hell breaks loose. Uninvited guests show up for Thanksgiving dinner. Let's just say it's never good when the dead are at your door, 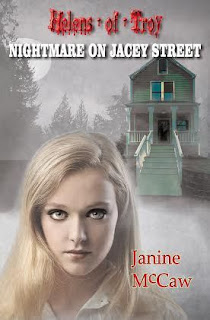 For those of you who missed the book trailer earlier this month, here it is again for you:
﻿
﻿
The eBook is available at all the usual places, Kobo Chapters, iTunes, Barnes and Nobel etc. Amazon is still on pre-order until Monday because, um .... I don't know. I guess I messed up. So go to Kobo, Canada.
The paperback will be released in advance of that other country's Thanksgiving. Two times the celebration. Two times the turkey.  Thanks for your support, fray. Big smooches. ﻿
﻿
Posted by Janine McCaw at 8:55 AM