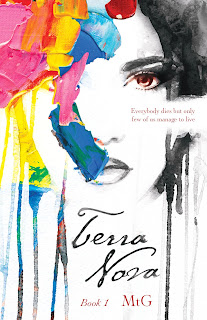 Terra Nova
Book 1
MtG
Genre: Young Adult Fantasy
Publisher: Friesenpress
Date of Publication: July 23, 2020
ISBN-10 ‏ : ‎ 1525572016
ISBN-13 ‏ : ‎ 978-1525572012
ASIN: B08DWQ4FHK
Word Count: 135, 430
Cover Artist: Friesenpress
Tagline: Everybody dies but only few of us manage to live
Book Description:
Evangeline is living the life of a normal teenager until mysterious, severe symptoms begin appearing. After passing out in the middle of a party, life as she knows it spirals beyond her grasp. She is then diagnosed with a rare, genetic blood disorder that causes her body’s white blood cells to kill the red ones. In the delirium of her deteriorating health, a door to a parallel world opens before her; however, once she steps through it, the portal closes, and she is unable to return to Earth.
The place Evangeline now finds herself in is called Terra Nova, a world wherein vampires rule supreme, with no traces of humanity left to speak of. Curious but afraid, she quickly learns that Terra Nova is not the shadow-side of Earth, but rather the tragic result of government experimentation. In order to survive, she must keep her mind open and accept the changes her body is undergoing; soon enough, those who she initially thinks are murderers become her trainers, whose help she must enlist if she ever hopes to return home—and soon enough, a romantic bond begins to bloom.
Meanwhile, Evangeline’s brother and friends back on Earth try to figure out what happened to her, how the government is involved, and how to bring her home. Unbeknownst to any of them is the mysterious outcast Bambi, whose secrecy disguises her power in making a devastating choice: save one world at the risk of destroying the other.
Book Trailer: https://youtu.be/f4kz4TuVe6A
Amazon     BN

Evangeline stood up and sighed. She started to walk down the street in the direction of the Duke’s house, done her trailing for the night, when she heard a voice behind her, “Did you expect to track someone who is already tracking you?”
She turned to see Josepina standing in the middle of the road in a blue gown with blue and gold embroidery along its hemlines and birds of all sizes and shapes embroidered into every spot and space on it. Looking at the dress Evangeline wondered how Josepina stalked her so inconspicuously. Did she go around town hiding in holes?

“Yeah, I guess I was a little optimistic in my skills,” Evangeline said.

“Not a little,” Josepina said, “You must know something about me now. I could lead his highness in eternal circles, Evangeline. You would have more chances tracking him, actually. So why is it that you hoped to find me?”

“Well, I guess I was just practising tracking...” Josepina was looking at her with an amused smile. Evangeline knew that Josepina could sense if she was full of shit. Obviously Evangeline could have practised on anyone. She changed approaches,

Josepina’s smile grew broader, “And what do you hope to learn from me?”

Evangeline’s face turned red, “Nothing, actually. I guess I was just curious about you because you have so much more life in you than most people here. You still talk about everything and seem to think about everything. It’s…. rare. And your clothes...how do you do it?”

“That is a much more interesting question than I thought you had,” Josepina said, “the dress...well, I create them out of hunger during the day with whatever materials I find. Crocheting and embroidering is time consuming. A perfect activity. Dressing up is also time consuming. Another perfect activity. Though I think most find the contrast of the bright clothing and their own ugliness something of a depressing reality.”

Josepina looked up at the night sky and then at Evangeline, “I will walk with you to the Duke’s” She began to walk and Evangeline stepped up beside her.

“The way we are now,” Josepina continued, “vampires as you like to call us, is a stagnant way. We cannot change, on the outside or the inside. You have seen that Ehvan can memorize facts, but his mind will always be that of a child. The inner maturation of his brain is related to the physical changes that happen within it. Something that cannot happen in this state. Someone whose mind was not very...developed...before, will not develop much now. They will know more facts. Learn skills. But they will not grow inside as humans.”

“I suppose my goal was always to understand other humans and through that to understand and know myself. I never considered that it was anything unusual, but looking around me now, I see that it is a rare goal.”

“I wonder what I would be like as one of you,” Evangeline said offhandedly.

“An odd thing to wonder after seeing us,” Josepina said, “though the fact that you actually thought to ponder this means that you would do better than most. You have almost no sixth sense ability but you have more depth than most pretty, young girls.

“Thank you. You know, I didn’t think you liked me much, to be honest.”

“I’m still deciding,” Josepina smiled a little shrewdly, “However, you stood in front of a city of beings that could rip you apart and you were able to look at us and speak to us as if we were still people. I respect that. Respect is more important than like.”

Evangeline let a couple minutes pass in silence before she asked the next question,“So, is it really true about the physical intimacy? I mean, is it impossible for you now?”

Josepina looked at her with that half-curious, half-knowing look and Evangeline quickly added, “I’m just wondering since there are some married couples that I have seen...”

Evangeline was doing her utmost to convince her face not to turn red. Of course she wasn’t just curious out of the blue. She was in an unspoken, apparently platonic, bed-sharing arrangement with a male whom she wanted to kick in the head for the majority of each night while at the same time looking forward to each morning in his room. Every day, when she put down her book and climbed under the covers she lay stiff and anxious, wondering if he would lie down beside her, knowing that he occasionally did, but never being awake when it happened.

Josepina’s lips curled into a wide, knowing smile and killed any chance Evangeline had of keeping the colour on her face normal. 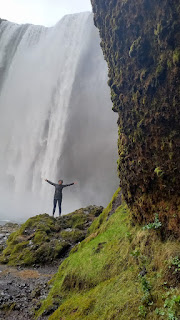 About the Author:
MTG has worked in numerous positions, mainly in managerial and executive roles. These include the editor-in-chief of a cultural magazine, an executive director, and most recently, the manager of a non-profit organization that works with immigrants and refugees. She has extensive experience working and studying abroad, including Germany, Italy, Korea, Abu Dhabi, and Pakistan; these experiences taught her about many cultures and worldviews, which influenced her writing.
Terra Nova, her first publication, is Book 1 of a series. The series’ concept emerged when she, like the protagonist, was diagnosed with the blood disorder paroxysmal nocturnal hemoglobinuria (PNH), and her then-boyfriend (now husband) joked she was becoming a vampire. She currently works and resides in Canada.
Website: https://mtgbooks.com/
Instagram: https://instagram.com/mtgbooks777 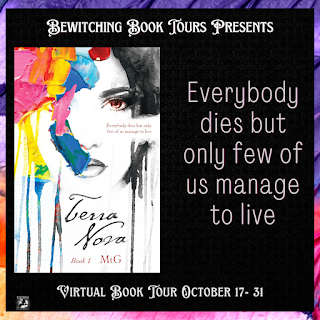