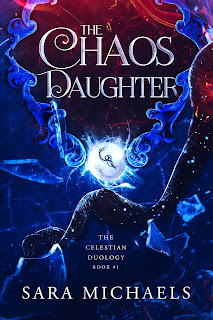 The Chaos Daughter
The Celestian Duology
Book One
Sara Michaels
Genre: Young Adult Fantasy
Publisher: Sara Michaels Books
Date of Publication: September 14, 2021
ASIN: B09CV82H7Z
Number of pages: 190
Tagline: When all magic is ruled by Order, being a child of Chaos is the ultimate danger.
Book Description:
Nastasya lives a sheltered, small-island life, hiding her Chaos magic and living quietly with her protective foster parents.
At the age of 18, she finally persuades them to let her venture across to the mainland… but what should be an exciting shopping trip quickly turns into much more than she bargained for, and events unfold that will change her future forever.
Nastasya has always been taught to hide her Chaos magic, but she’s never understood why.
Her past has always been a mystery to her, but her trip to the mainland leads her to question everything, and she knows she must learn more about her birth family and the power she possesses.
The Chaos Daughter is an action-packed adventure of self-discovery inspired by the tale of Anastasia. Question everything, and trust no one: what Nastasya’s about to discover will change the world forever.
Amazon

Jalen screamed. His face flushed white, then a bright crimson. He wrapped his hands around Nastasya’s arms, but she just stared down at him.

Flashes of white and black and yellow erupted across the landscape as their magic collided with each other, touching ground every so often. Two Order priests dropped out of the sky, dead on impact of the icy ground.

Jalen let out another roar, and a stinging burn started up Nastasya’s arm. Was this what he was feeling? Were his bones smoldering like a blacksmith’s iron?

“Let… go,” Jalen stammered through gritted teeth. A wince crossed his face, but his expression did not immediately relieve. Instead, the grimace lasted, like the pain that rested inside his bones was unending, like the pain and torture Order inflicted all across the Ice Lands.

“I told you to make them leave,” Nastasya said. Four wolves joined Nastasya by her side. “Now look what you’ve done to them…” She eyed the area where a half-dozen lifeless Order priest bodies lay motionless. “Why did you come here?”

Another wince caused Jalen to recoil for a moment before answering. “Order,” was all he managed to say before another wave of agony triggered over his face. Jalen gasped for air.

“Well,” Nastasya started, thinking. There was nothing left to do but complete what she had started out to do. If Order would continue to kill Chaos in its tracks, then the only thing she could do was inject Chaos back into the Primary Crystal, like her magic wanted all along. “Get up,” she commanded.

Jalen tried to stand, but something rolled behind his eyes and caused him to stop, recoiling for a moment. He took another long, steadying breath, and his skin seemed to gray with every attempt to quench the torment raging through his body. “What?” he asked through gritted teeth. “No,” he said a moment later with a little more persistence.

Nastasya smiled, recognizing the familiar black swirls in the whites of his Order eyes. “I think you will,” she said with a sneer. It was Chaos that controlled him now. It might take a while to fully grasp its power, but it would soon enough. “Whether you like it or not.”

Contented confidence washed over Nastasya like adrenaline surging through her body. She knew what was about to happen, even before it happened. With a simple insinuation, she would command Jalen, the righteous Order priest, to take her to the Primary Crystal. And, without fault, he would. It did not matter what bits of Order still scrounged inside his body—her

Chaos still controlled his mind. By touching her Chaos to his Order, Nastasya had infected him, had injected everything Chaos had into him, and it was with that Chaos that he would help her.

A light blinked on in her head. That was exactly what she needed to do to the Primary Crystal.

“And why…” Jalen pressed his teeth together hard, and his lips turned white like he was trying to fight something off—but he was losing miserably. A second later, his face relaxed, and he continued. “Why’s that?”

Nastasya cocked her head to the side and arched her back. “Because Chaos reigns.”

About the Author:
Sara lives in the Pacific Northwest with her husband and two dogs. A lover of the writer word from an early age, Sara reads everything from middle grade to young adult and adult novels. She loves genres ranging from science fiction and fantasy to contemporary and historical fiction, which is why she writes and plans to publish across several genres, including contemporary, romance, NSFW, young adult fantasy, and science fiction.
When she’s not writing, you can find her playing video games, reading way too many books at the same time, singing to music, or riding her motorcycle around a beautiful Washington backdrop. She also writes for several online blogs and newspapers.
Subscribe to her monthly newsletter by visiting https://www.saramichaelsbooks.com/Newsletter
Website: https://www.saramichaelsbooks.com/
Instagram: https://www.instagram.com/authorsaramichaels/
Newsletter: https://dl.bookfunnel.com/kati232znm 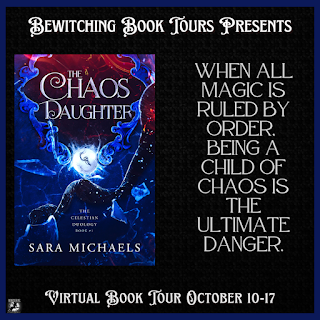