Half way to the big day. Let's sit for a moment and talk with Vicki-Ann Bush, author of A Winter's Night. Welcome, Vicki-Ann!

VAB: Alex is a 17yo transgender boy with psychic abilities, who comes from a lineage of Italian witches. Each year his powers grown and he becomes more comfortable using them. Learning to control his abilities with the help of his family, Alex helps the dead in their quest to move on. Sometimes this involves murder, demons, and other ominous foe.

SC: Sounds like Alex is very busy indeed. Do you believe in the paranormal and if so, do you have an experience you can share?

VAB: Yes, I absolutely believe in the paranormal. The women on my mom’s side of my family have what I like to call a sensitivity. Simply explained, we hear and see things, and sometimes sense when things are turning for the bad or good. One of my most vivid memories is when my kids were in grade school and one morning I woke up with an overwhelming sense of dread. I kept my kids home that day, and a gunman who’d robbed a convenience store ran through the school with the loaded weapon. The school was on lockdown for quite some time. Luckily, they were able to capture him without anyone getting hurt.

VAB: Currently I’m working on a YA paranormal romance entitled, A Witch’s Love. In addition, I’m adapting Alex McKenna & The Geranium Deaths to a short screenplay.

SC: We'd better let you get back at them. Thanks for the visit. 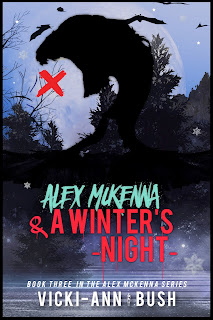 Alex McKenna and A Winter’s Night
Alex McKenna Series
Book Three
Vicki-Ann Bush
Genre: YA, Paranormal, LGBTQ
Publisher: The Parliament House
Date of Publication: December 14, 2021
ISBN: 9781736981900
ASIN: B091BG72FG
Number of pages: 296
Word Count: 78,682
Cover Artist: Shayne Leighton Machova
Book Description:
For a minute everything in Alex McKenna’s life was perfect. He only had one year left of high school, his girlfriend Margaret, was the love of his life, and he couldn’t ask for a more supportive family.
His psychic powers were growing and he was learning more and more about his family’s ability as Strega witches. Yup…things were good.
Until the night it all fell to pieces.
As Margaret lay in the hospital after a serious car accident, her disembodied spirit searches for a way back to the living. Alex is desperate to save her and the victims of his next case. An ominous being haunting the hospital and stealing the souls of infants and the elderly, sending them straight to hell.
Book Trailer: https://youtu.be/hmx90EHXEho
Amazon     BN      Parliament House Press

“I love you.” Margaret leaned in and kissed his cheek. “I’ll see you in the morning.”

Alex lingered as he watched the little green Hyundai pull away. A cold tickle ran along his left arm. He pushed the sleeve of his hoodie up to the elbow. A scant number of bumps cascaded from his bicep—goosebumps. He quickly surveyed the area. No sign of any afterlife activity. Maybe you’re just cold, McKenna. He chuckled to himself. Dismissing the incident, he scurried into the comfort of forced heat and a billowy comforter.

Nestled tightly under a pile of covers that adorned his bed, he slid his arm out and quickly checked it again. The goosebumps were higher and now mapped their way over most of his
arm to his shoulder. Something was going on, and it wasn’t just from the chill of a winter’s night in Floral Park, New York. Ever since he could remember being aware of his connection to the
dead, his goosebumps served as a sort of warning. Whenever he encountered a spirit or something was about to happen, they’d stand at attention and alert him. The size and severity were the key. The worse they were, the bigger the issue. Tonight’s warning system started to worry him. They’d grown considerably in the past hour, indicating danger.

The precocious six-year-old materialized. He was sitting in the chair at Alex’s desk.

“I knew you were here because I smelled peanut butter. You playing with Wilby again?”

“I’ll take that as a yes. And I do have goosebumps, but they’re not from you. Something else is going on, but it hasn’t revealed itself to me yet. You hear anything or see anything different lately?”

“Okay, buddy, thanks. And stop hiding the peanut butter from Wilby. You’re making him crazy. Besides, when he gets the Know and can see you, he’s gonna want to get you back.”

“Yeah.” The little boy twirled in the chair.

Alex rolled over to his side and faced the wall. The looming feeling of dread had left him restless and unable to fall asleep. He decided to try a technique his great gram had taught him. Closing his eyes, he imagined a large, two-story house with a wraparound porch in the country. He was sitting on the steps facing the backyard. An old-fashioned clothesline ran the length of the yard from the detached two-car garage to one of the posts supporting the porch roof. Stark white cotton sheets were clothes pinned to the line and gently waving in a light breeze. The sun was bright but not hot, and Alex held a cool glass of lemonade—homemade, not that powder, store bought imitation. He took a sip. The chilled sourness coated his throat, quenching the thirst he wasn’t aware of. It felt good. Looking up to a canvas of baby blue and white puffs, he smiled. Life was perfect.

His eyes grew heavy and fluttered gently. He took a deep breath and sighed. The weight of sleep pressed softly on his limbs, spreading peacefully over the rest of his body. He tilted
his head to let a brush of warmth paint across his cheek. This was a good place. A safe place. As his breath slowed, he turned on his back and wriggled slightly into the curves of the mattress.

The night was taking him.

Alex rubbed the impending sleep from his eyes and turned toward the bedroom door.

“Hang on.” Alex reached for the chain on a small lamp sitting on the end table by his bed. Yanking on the brass string, the 25 watts emanated a soft halo of dim light. “Okay, stop messing with me. Where the hell are you? Are you in the closet?”

What the fuck is going on?”

The runaway train racing along his veins acted like a puppeteer pulling the strings. Alex leapt out of bed. The slick, newly waxed oak floors would normally make him wince in the
dead of winter. The extreme temperature piercing the pads of his feet and travelling along the muscles in his calf was the reason he normally slipped on a pair of thick socks, but not tonight. He barely felt the sub-zero temperature razor his flesh as he pivoted around, searching for his love.

“Alex, look at your arms.” The little boy pointed.

“Jacob, what are you doing?”

Alex unzipped his hoodie, swiftly pulled it from his body, and threw it on the bed. Extending his arms in front of him, he stepped closer to the light. The bumps had gathered in a tight pattern completely covering every space of smooth flesh. He lifted the front of his tank; the same formation had taken over his belly and chest.

“Margaret! Where the fuck are you?”

“Alex, she’s standing right beside you.”

Originally from New York, Vicki-Ann currently resides in Nevada. Writing Young Adult paranormal, she finds inspiration from events that have been in her life for as long as she can remember. Inheriting the sensitivity to the supernatural from her family, they continue to be an endless source of vision.

Released in September 2019 from The Parliament House, Alex McKenna and The Geranium Deaths. The first book in a YA, Paranormal, LGBTQ series, that features a seventeen-year-old, transgender boy with paranormal abilities.

Vicki-Ann has several titles that have received Reader's Favorite Five Star seal, as well as the 2017 and 2018 winner of, 50 Great Writers You Should Be Reading. Most recently, Alex McKenna and The Geranium Deaths, received the Gold medal in the Readers Favorite Book Awards for Young Adult, Paranormal. 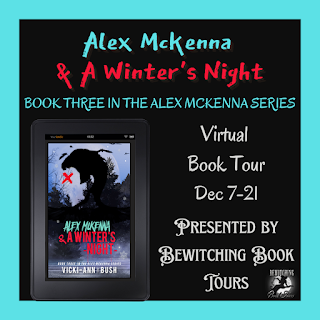