Hey, well this is a treat! We've got author Sky Purington back in the house for another little visit. Welcome back, Sky!


SC: Tell me a little bit about your main character of this book.


SP: Laird Keenan MacLauchlin has just returned home from war to a depleted, illness-ravaged clan he’s determined to rebuild no matter what it takes. As this book and series evolves, it dives deeper into the emotional toll years of battling took on my heroes (namely what is now called PTSD (Post Traumatic Stress Disorder) and how it affects them coming together with their heroines.
SC: PTSD is certainly a very real thing.  Paranormal things… maybe/maybe not. Do you believe in the paranormal and if so, do you have an experience you can share?

SP: Actually, I do. I’ve had several experiences over the years, but what happened when I first moved into my current home in Virginia stands out above the rest. For the first few months we lived here, something mimicked our voices. Though unnerving, it stopped after a while. I was later told it was just trying to make us feel comfortable. In truth, this has turned out to be the most ‘comfortable’ house paranormal-wise I’ve lived in so far.


SC: I have heard tales of mimics. That was probably pretty creepy. Changing the subject, what titles are you working on now that you can tell us about?
SP: I just finished Scoundrel’s Fortune (Highlander’s Pact, Book 2), a steamy historical romance. Now I’m beginning A Scot’s Redemption, not only the last book in my MacLomain Series: End of an Era saga but the last tale in my entire 25+ book long MacLomain series. Think stories full of sexy-as-sin Highland wizards and hot-as-heck dragon-shifter Scots. ;-)


SC: Thanks for coming back today, we hope to see you again soon. Right now, wej'll take a look at today's book: 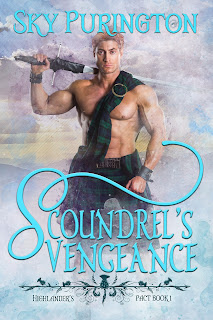 Tagline: A scandalous second-chance romance rife with passion, intrigue, and a life-altering secret.


Despondent from years of war, Keenan returns home to find his clan has been reduced not only in numbers from plague, but the family coffers are nearly depleted. Dedicated to restoring his clan pride, Keenan strikes a bargain with his brothers, they will each marry, but not for love, only for the generous dowries their future wives will bring.

Fionna has suffered the consequences of endless wars and plague, leaving her the unlikely laird of Clan Taylor. When her past love summons her to his keep under the threat of killing her clansmen he captured trying to steal horses, she has no choice but to meet him.

There she discovers a man much changed, heartless and bitter. Especially when he demands that Fionna help him get engaged to her best friend!

Unable to deny him, Fionna plays along, waiting for the right moment to strike, save her clansmen, and celebrate teaching Keenan the hardest lesson of his life.

But not everything is what it seems, and Keenan and Fionna discover that distance and time cannot change what their hearts truly want—each other.

She wrung out the cloth and turned back, doing her best not to show any reaction to his body. He was far more muscular than before, the hard ridges of his abdomen obvious. Having clearly swung many a sword, his biceps and forceps were larger, too. She cleared her throat and kept her mind to the task instead of focusing on his exceptional physique.
Rather, she eyed the various new scars riddling his upper body. There were so many. Too many. Which told her just how rough things had really been. The endless battles he had fought. The wounds he had suffered. Something she could not help alluding to as she began washing the slash he had received protecting Dougal.
“The battling seems never-ending, aye?” she said softly. “It has taken its toll.”
She had been relieved to hear he’d arrived home safely from France, then felt renewed dread when he went off to fight alongside King David II. It was too much for any one man. She could only imagine the horrors he’d seen. The men he had watched die.
“It hasnae been easy,” he confessed, saying more than she anticipated. But then the look on his face, as she stood close, was telling. He appeared lost as he gazed at her. As though her proximity somehow allowed him to speak freely. To confide.
“Nay.” She understood that he was not just talking about the battling but the illness that had swept through Scotland. Maybe even based on the sentiment she swore flashed in his too-tender gaze, the long years between seeing one another. “Many of my men fought, as well.” She met his gaze, overly aware of the heat coming off his strong body. “Verra few fought alongside both the French and King David, though.” While tempted to touch his cheek to soothe him, she held back. “’Tis a lot, Keenan…for any man.”
“’Twas what needed to be done,” he said softly, his gaze lingering on her.
For a moment, she thought he was going to reach out and touch her hair like he used to. Or brush his knuckles along her jaw. She nearly closed her eyes, remembering the sensation well.
Instead, she spoke unintended words. “Why did ye do it?”
“Because Da expected it of me…and because my country needed me.”
“Nay, not that,” she murmured, pouring a dab of whisky over his wound. She really should leave this be, but her curiosity had only been growing. With it, a sense of frustration she couldn’t quite place. “Why was my chamber at yer castle unchanged?” Her gaze returned to his face. “After all these years?”
“I dinnae know,” he said a little too quickly. “Ma left it that way.”
“Did she, God rest her soul,” she replied, not questioning but stating, because she knew he lied. She could see it in his eyes. “Why did ye not change it when ye returned then?”
“There was no reason to.” He shrugged, fibbing away. “Honestly, I didnae give it much thought until I knew ye were coming.”
“Ye mean until I was summoned.” She sighed and wrapped his shoulder with fresh cloth. “Dinnae mistake such for a civil invitation. One that came after so many years.” Her gaze lingered on his face again. She tried to keep emotion from her voice. “After nearly twelve years.”
His pupils flared, and emotion churned in his gaze, simmering just beneath the surface. He didn’t let them get the better of him any more than she did hers, though. Rather, instead of responding, he redirected the conversation.
“Tell me, Fionna.” He stood, no doubt on purpose. His sheer size a means to prove he was not vulnerable. “Tell me why Clan Cameron just attacked us.” His gaze narrowed. “And why, if I am not mistaken, they thought to take wee Dougal?”
“’Twas not Dougal they were after, but me.” She stood up a little straighter, not letting him intimidate answers out of her. “Their chieftain thought to take me as his wife, and I refused him.” She shrugged. “Now he thinks ‘tis his right to take me with or without my approval.”
“Is he not near yer late da’s age?” He frowned. “And those clansmen were after Dougal. I dinnae doubt that.”
“Their chieftain is younger than Da but still considerably older than I am.” She flinched at the idea of his meaty paws anywhere near her. “And if they thought to take Dougal, ‘twas merely to get me in the end.” She was careful to keep an even expression. “The Camerons know well enough that I take the welfare of my clan’s bairns verra seriously.”
“So, Laird Cameron thought to take Dougal as a bargaining chip?”
“Aye.” She nodded and started back toward the others only for him to grab her forearm in passing.
“That is all the more reason ye shouldnae let yer bairns do yer horse thieving,” he rumbled. “Because one of these days, the Camerons will catch one of them, and ye’ll find yerself wedded and bedded in no time.”
“I would attack before I agreed to that,” she assured.
“I dinnae know,” he mused. “Ye didnae attack me.”
“Ye’re not trying to wed me,” she reminded. Or bed me. At least not anymore.
“I amnae,” he agreed, surprising her with how tender he could be one moment, then callous the next. “But then, ye dinnae have something I need.”

“Nay.” She cursed the words—the taunt—the moment it rolled off her tongue. “Or so, ye think.”

Purington loves to hear from readers and can be contacted at Sky@SkyPurington.com. Interested in keeping up with Sky’s latest news and releases? Either visit Sky’s website, www.SkyPurington.com, join her quarterly newsletter (https://bit.ly/2Mw0yyO), or sign up for personalized text message alerts. Text ‘skypurington’ (no quotes, one word, all lowercase) to 74121 or visit Sky’s sign-up page (https://mobile-text-alerts.com/subscribe/skypurington). Texts will ONLY be sent when there is a new book release. Readers can easily opt out at any time. 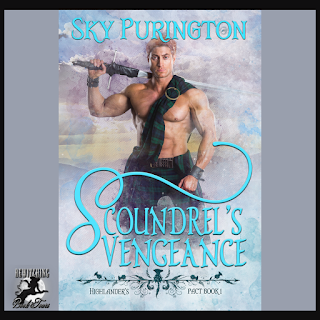