What a crazy world this is right now, n'est pas? Time to escape for a few moments and enjoy our chat with author Shana Vernon. Welcome, Shana!
SC: Tell me a little bit about your main character of this book.
SV: Lenna’s character is extremely loyal and brave as she infiltrates the Guild in order to discover why her father went missing. She was hidden from the world her entire life because her existence is forbidden, so she uses an alias and hides her powers.
She is rational and not guided by her emotions, knowing that is the best way to find her father. She has self-doubt, but tries to work through it because her father’s life is on the lines should she fail.
She has incredible powers, but she isn’t infallible. As the book goes on, her character develops a slight dark edge in her desperation to save her father.
SC: Speaking of incredible powers, do you believe in the paranormal and if so, do you have an experience you can share?
SV: When I was sixteen years old, I was on a date with a boy. On the way home, someone sideswiped his car and we both pulled over to give insurance details. The man who hit us was angry and quite violent, and his emotional state continued to escalate to a dangerous point.
Out of nowhere, someone showed up and immediately calmed down the other man, who agreed to hand over his insurance information. After we exchanged our details, we looked back to thank the person who helped deescalate the situation, but he was gone.
Many religions believe in the idea of a guardian angel, and that was the one experience where I was willing to believe it was possible. He showed up, helped out, and disappeared.
SC: Thanks for telling your story. What titles are you working on now that you can tell us about?
SV: I am working on three works at the moment.
The Assassin’s Revenge - The Hybrid Chronicles Book Two.
Sofia - a prequel novella to The Assassin’s Daughter that focuses on Sofia’s history and how she ended up in the Guild.
The Gladiator’s Escape - This is a companion novel to The Assassin’s Revenge, which follows one of the characters that is introduced towards the end of the book.
SC: Sounds like you've got a lot on your writing tablet, we'd better let you go and take a look at your novel now. Thanks for joining us.
﻿
﻿
﻿
﻿ 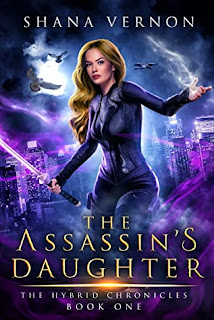 The Assassin’s Daughter
The Hybrid Chronicles
Book One
Shana Vernon

I've been hiding from the Guild since I was born.

If they knew about my magic, they would kill me in a heartbeat.

I should be avoiding them, but instead, I enter the Guild as a regular human recruit.

Papa went missing after a mission, and I need answers.

I realize I might have bitten off more than I can chew when my new instructor is the guy I kissed a few months before.

It doesn't seem like Cade recognizes me without my disguise, but if he does and blows the whistle, I'm as good as dead and so is Papa. 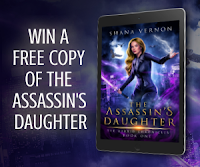 Shana Vernon is a full-time writer and mother of triplet boys.

When she isn't writing or taking care of her kiddos, she is reading, exercising, experimenting with cooking, or traveling around the world. 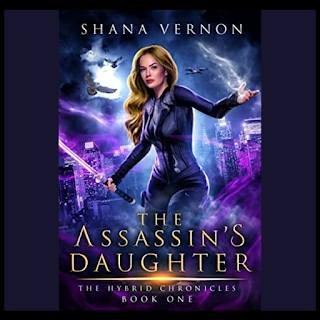