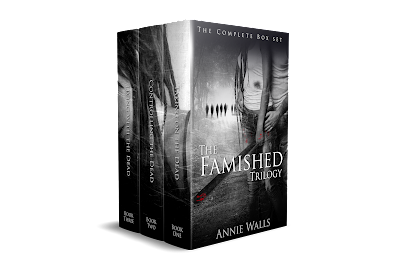 After surviving four years alone, Kansas Moore ventures from her refuge to uncover mankind resumes without her. Upon encountering Rudy Hawthorne, she plunges into a new world deep with secrecy, deception, and manipulation.

Kansas struggles to preserve her humanity from distorting and fading like that of society around her. Not only does she fight the undead, she battles for the resistance. Answers prove dangerous to seek as everything is not what it seems.
As Kan accepts comforts in new friendships and love, she soon realizes civilization isn’t the only thing worth fighting for.

In an exhilarating plot thick with twists and turns, The Famished Trilogy propels you through a unique journey that’s emotional as much as it is gripping. Nothing will prepare you for the ride. 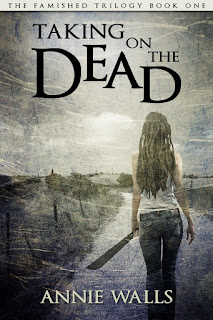 Taking on the Dead
The Famished Trilogy
Book One
Annie Walls

Life for Kansas was perfect until the day the world changed. She has been hiding out for four years in solitude. It’s the only way to survive. The only way not to draw zombies. Helping a small group of people, she learns the new world might not be what she assumes.

Venturing out of her refuge and comfort zone, she meets Rudy, who helps her find a greater purpose. She realizes the world has moved on without her. Only it’s not what she expects. Her knowledge of the living dead grows and only makes her more curious as humanity continues to hang on by a thread.

While on her search for answers she finds comfort in new friendships and love, but her past seems as if it will haunt her forever. Kansas takes it upon herself to help other survivors, which would be easy if the famished were the only obstacles. In a post apocalyptic romance trilogy plot thick with twists and turns, this adult dark fantasy is emotional as much as it is horrifyingly gripping.

Taking on the Dead, The Famished Trilogy Book One Excerpt

Some people say you can’t change overnight. I’m sure this is true, most of the time. In my case, I changed within seconds, never to be the same. Within those seconds, most people in the world changed, just not in the way I did.

I’ll never forget my first zombie. Malachi and I wandered the small carnival as the sun set. The glowing lights of the spinning rides replaced the fading sunlight, and the smell of funnel cake wafted in the air. I could still feel Malachi on my skin. It wasn’t surprising since we had a spontaneous tryst in the parking lot. At twenty, we had our whole lives ahead of us.

I remember grabbing his hand, my mind still with him in his car. Radiating affection, he looked at me, our shared secret reflected in his big, brown eyes, his messy brown hair glinting auburn from the sparkling lights all around. He dressed like he always did, wearing whatever was comfortable—a yellow Nashville Predators t-shirt and denim shorts. All his life, he played hockey, from peewee to amateur. He loved the game and continued to play as an adult.

Thrilling sounds of the carnival carried on the wind. I complained about how much we paid for the all-you-can-ride bracelets. There were only a few rides to enjoy, but the carnival charged too much. Some people paid an arm and a leg. The carnival was overflowing with people scurrying about the massive Ferris wheel and Tilt-a-Whirl. Children laughed and chased each other with innocent, painted faces—dancing, and skipping along with the fair music.

Malachi struck a beeline to a cotton candy booth. After the purchase, he stuffed a big piece of pink fluff in my mouth. I can still taste the sticky sweetness melting on my tongue. Although he did it provocatively, it wasn’t until later I grasped his motivation, which was to keep me from complaining. He was subtle that way.

Sometime later, we got off the Ferris wheel, both heated, clinging to each other and ready for another tryst, when we went off the beaten path to use the foul port-a-potties.

When I think about it now, I know the outbreak began early in the day. We had passed several wrecks, heard many helicopters and sirens and saw a few zombies, but we were too wrapped up in ourselves to notice. I blame it on being in love, but I swear if I saw a person walking down the street covered in blood or eating someone, I would’ve paid attention. Maybe.

We did when we saw a zombie attacking a frizzy, red-haired woman next to an old, rusted bike rack.

Only, we didn’t know it was a zombie. The woman’s shrill screams were like something from a horror flick. My blood curdled when a man bit into the woman’s forearm. Blood leaked down her arm and dress. Her shriek pierced my soul.

Malachi pushed the man off, trying to be a hero.

“Kansas, call 911,” he screamed, whirling to help the woman. I trembled, pulling out my cell phone and dialing, only to hear a busy signal.

When the man regained his stature, I caught sight of him. He looked crazed, his eyes were bloodshot, and the front of his thigh gone. Muscle tissue hung from the stark white bone. Blood covered his face, neck, and clothing—some kind of uniform—USPS which was weird and out of place on a Sunday. His stare drifted to Malachi. A ferocious growl came from his mouth before it clamped onto Malachi’s shoulder. Malachi’s face twisted in pain, but he still hit the jaw of the man, loosening the grip of the bite. Blood dripped down Malachi’s arm, dropping from his fingers onto the concrete. I swear I could hear the little splatters.

A scream erupted from my throat, freezing me to the spot. My trembles changed to full-on shakes while Malachi grappled with the mailman who, in my mind, had obviously eaten bath salts. The shouts from the carnival no longer sounded like amusement park screams. I saw a kid, no older than eleven or twelve, limping toward me. His dirty blond hair dangled in front of his eyes. One of his feet bent awkwardly. Blood disguised his face, neck, shirt, and hands from being recognized as human.

Something serious was going down. Malachi was still fighting off the hyped-up mailman. I was in some kind of shock but told myself to get a grip.

My insides hardened as time slowed and narrowed my idealistic world into a vast tunnel. I clenched my fists to keep them from shak‐ ing. That’s when I saw the bell. Over the bushes in the next section of the park, the “High Striker” game—the one with the hammer to strike and ring the bell—was lit with the colors of the rainbow, flashing trails up and down the length of the game. I ran straight through the bushes to find the game deserted. Plush bunnies still waited to go home with a lucky ringer. I found what I wanted—the sledgehammer.

The bushes scratched against my legs as I jumped through them to find more crazy people closing in on Malachi. Ice seemed to spread through me.

“Malachi! We have to go. Now,” I yelled, surprised to hear my voice clear and composed. He looked pale.

Gripping the sledgehammer like a baseball bat, I hit the mailman in the head. Malachi grunted as he kicked and shoved more people out of his way.

I bashed as many as I could. Most went still twitching and moaning. The mailman crawled toward us, his head bent at an odd angle. My stomach convulsed, but I swallowed the extra saliva as I slung the hammer to finish the job. His head split wide open, spilling things onto the sidewalk that should never be seen.

I glanced at Malachi to find him looking at me as if he didn’t know me. With my free hand, I grabbed him and we ran. I tripped on my cute wedge sandals, cursing myself for being vain enough to wear them. He helped me up, and we continued running around game booths. I clung to the sledgehammer like a lifeline, taking in the horrid sights before us.

A child ripped into water bags in a booth, devouring the little fish inside, all the while the man running the booth feasted on another person. The taste of sweet acidic bile came into my throat. The carnival had become a scene of macabre lights, blood, and screams. People were getting attacked and eaten alive all around us. Kids with face paint eating their parents. The parents screaming for help. Panic filling their brains when they noticed it wasn’t just them, unable to comprehend what was happening, as if they would wake from this nightmare. Fear dawned in their eyes as they realized they wouldn’t wake. This was real.

I stopped to help a woman and her baby, only to see her tearing into its tiny body. Gore splattered the baby’s stroller. When its little cries ceased, the lady looked up with baby bits stuck to her nose and chin. Malachi grabbed me, spun me away to protect me from the unbelievable scene, but it was too late. The lights blurred with the tears filling my eyes, only to stain my cheeks as we ran. The carnival music seemed to slow to a drone and skip beats.

Malachi never made it home.

Yes, you can change overnight. In seconds, and no, you never forget your first zombie. Mine wore a USPS uniform. He killed Malachi.

No, I killed Malachi. 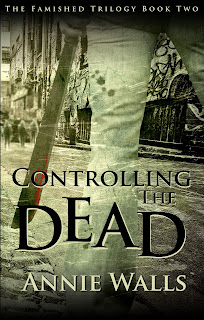 With the help of her new companions, the path Kansas follows leads to more knowledge of the ever adapting famished.

The team finds help in unlikely places, meeting more survivors, and discovers the possibility of a new beginning.

When the team experiences a devastating loss, Kansas struggles to keep her humanity from fading and distorting like that of the surviving society around her. It begins with knowing who to trust and who to leave behind. First, she must trust herself – she won't make the same mistakes twice.

As the answers to her questions are revealed, Kansas begins to understand the knowledge comes with a heavy price and great responsibility of controlling the dead.

In a trilogy plot thick with twists and turns, this adult dark fantasy is as emotional as it is horrifyingly gripping. 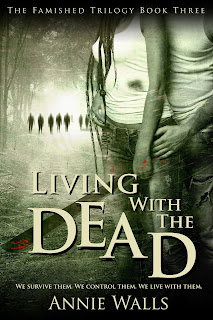 For five years, life is strenuous for Kansas Moore as she travels with her team and saves more people from the clutches of the revolutionists. On the downtime, they construct and enlist for their own cause.

When the general assigns her to search for Mago, she turns to the team and what they find overturns everything they've learned so far.

In this dramatic conclusion of The Famished Trilogy, things are not what they seem and comfortable living is far from reach.

This book contains graphic violence, intense language, sexual situations, drug use, and is intended for a mature audience. 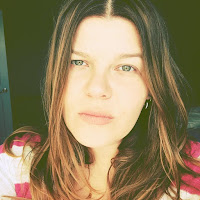 Annie Walls is an author of dark and urban fantasy. She resides on the Tennessee countryside with her husband, son, and bulldog. Far, far away from society. She’s a romantic and misanthropist. When she is not writing, she is reading. 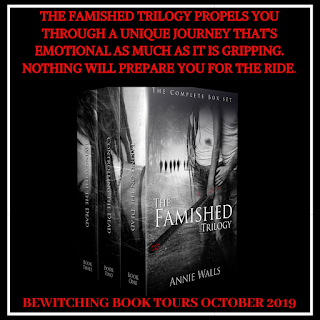