THE DARKEST GATEWAY by JERI WESTERSON

We continue in our very busy month by taking a look at author Jeri Westerson's novel "The Darkest Gateway". This is book four in the series, and here's a trailer for you to watch!
﻿ 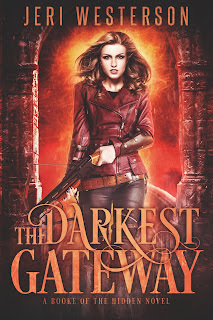 With the arrival of Samhain, the supernatural Booke of the Hidden is set to release a barrage of deadly creatures onto the hapless village of Moody Bog, Maine.

Tea proprietor Kylie Strange knows the showdown is coming and wants to end the Booke for good. But the only way to accomplish this is a journey to the Netherworld and get the help of the only being powerful enough to destroy the Booke: Satan himself. And, though the brooding and elusive demon Erasmus Dark has captured Kylie’s heart against her better judgment, she ignores his repeated warnings that the mission guarantees her doom.

I moved to the very edge of the road and waited.
The sound grew louder. It couldn’t be anything except hoofbeats. They clopped, not in a gallop but in a leisurely canter. And soon, there was the Dullahan coming around the curve. His head looked even greener and slimier under his arm than it had before, if that were possible.
His weirdly roving eyes spotted me easily. He kicked his red-eyed horse’s sides and hurried toward us. All the while, he swung that spine whip. With each revolution around his headless neck, the weapon grew longer and longer.
I kept the spear close to my side. I didn’t want that whip to catch it the way it had gotten the crossbow the last time.
He was almost upon me when he shrieked, “Kylie Strange!”
“That doesn’t work on me, you idiot!” I yelled.
The face frowned under his arm. It cast its googly eyes toward Erasmus and opened his mouth to yell his name.
“He’s a demon, remember? We’ve been through this before. Boy, you sure have a short memory. Must be because your brain is decaying faster than the rest of you. Looks like a bad case of melting Roquefort you got there.”
His dead face either grimaced or it really was melting. “Then I don’t need to say your name,” he said in a high screechy voice.
He spun the whip. Before I could get out of the way, it came at me and wrapped around my body, trapping my arms at my sides. I barely got out a yell before I was yanked off my feet.
The horse started galloping and I was flung out behind it almost parallel to the road. I couldn’t bring the spear up. I was whipping around in the air and getting a little seasick, but it was better than being dragged behind on the asphalt. There wouldn’t have been much left of me after that.
The bones of the spine whip were digging sharply into my skin. I tried wriggling free. If Headless decided to fling me off a cliff, there wasn’t much I could do about it. I knew Erasmus must be around somewhere, but this was up to me to figure out…if I could.
The Dullahan galloped around a sharp curve and I was thrown and dragged through the limbs of pine trees shouldering the road.
“Dammit!” I yelled, spitting out pine needles. “I am so going to kill you!”
He lifted his head up with his other arm. It swiveled and glared at me. “Not if I kill you first, Mistress Strange.”
“No need to be so formal,” I grunted, struggling. I slammed into some holly bushes and OW!


The face cackled and turned away, tucked back under his arm again. Then I looked up and saw what he was cackling about. The next curve of the road didn’t have any nice prickly holly bushes or spikey pine boughs. It was just granite all the way up the rock face. “Shit!”

Los Angeles native JERI WESTERSON is the author of twelve Crispin Guest Medieval Noir Mystery novels, a series nominated for thirteen national awards from the “Agatha” to the “Shamus”. Her fifth novel BLOOD LANCE was named one of the Ten Hot Crime Novels for Colder Days by Kirkus Reviews, and her sixth, SHADOW OF THE ALCHEMIST, was named Best of 2013 by Suspense Magazine. For BOOKE OF THE HIDDEN, her urban fantasy series, Publishers Weekly said, “Readers sad about the ending of Charlaine Harris’s MIDNIGHT, TEXAS trilogy will find some consolation in Moody Bog.” The fourth and final in the series, THE DARKEST GATEWAY, releases October 2, 2019. Jeri also writes the humorous SKYLER FOXE LGBT MYSTERIES under the pen name Haley Walsh. Jeri’s short stories were included in several mystery anthologies, including Shaken: Stories for Japan (for the 2011 Earthquake Relief Fund). Jeri was also featured on two local NPR shows, “My Awesome Empire” and KVCR-Arts. She has served two terms as president of the Southern California Chapter of Mystery Writers of America, twice president of the Orange County Chapter of Sisters in Crime, and as vice president and California Crime Writers Conference co-chair for the Los Angeles Chapter of Sisters in Crime. See more about Jeri at JeriWesterson.com, BOOKEoftheHIDDEN.com, and SkylerFoxeMysteries.wixsite.com/novels. 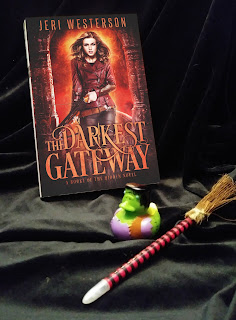 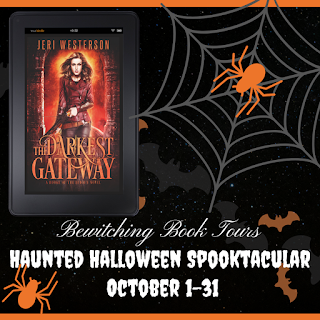