SC: Tell me a little bit about your main character of this book.
RB: Ellen longs for an extraordinary life, so when her aunt reveals Ellen is actually a potential hero of the world, she should have been ecstatic. But, despite now knowing what she is, or what she could be, Ellen is terrified of the future she thought she always wanted.
SC: Do you believe in the paranormal and if so, do you have an experience you can share?
RB: There was a time I believed there could be nothing better than if the magical creatures I loved were real. Fairies and unicorns especially. Then I read two books called Horn and Bleed, and I realized the serene creatures of my dreams might not be so sweet and fluffy. If they are real, they can stay happily where they are.
SC: What titles are you working on now that you can tell us about?
RB: I am currently working on Imperium Academy books 2 and 3 while finalizing the plans for books 4 through 6. I was hoping to squeeze in a short story to add to the Enchanting the Fey series too this year. So far King Blake has his own origin story in Prince of Elves, and I would love to write a future snapshot of where Drendor and his dragon family are now that the war is over and they have their fire back.
SC: Thanks for dropping in. Let's take a look at your novel now.
﻿ 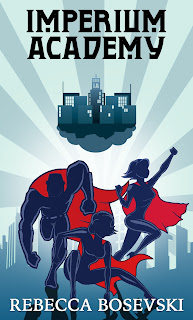 A genetic leap gave her powers, but before she can take up the cape, Ellen will have to brave Imperium Academy.

Ellen doesn't remember much about her parents, they died when she was four. Raised by her aunt she's envied for years the homo-magis children called on to be tested and subsequently enrolled in one of the five academy’s for heroes.

Or so she thought.

Her parents were two of the first Superheroes, their lives sacrificed to stop Novaside and save their only child.

Ecstatic, yet a little nervous to finally be a part of the world she'd dreamed of, Ellen is off to Imperium Academy.

But her classing doesn't go as expected.

Instead of joining the ranks of the illustrious Star Heroes, Ellen is regulated to the role of Sidekick, after all, night vision is barely a superpower.

Many have begun to question the need for Sidekicks, some teachers even suggesting they would be better suited to other employment.

But with Novaside getting bolder, and her latest attack hitting too close to home, Ellen is determined to stay at the academy and prove them wrong.

After all, where better to learn to be a hero than a school full of supers?

Her classroom had seating for thirty-four students but a third of them sat empty now. It was an inevitable outcome. Of course they would leave—she would have. Had she had that option. Had she been born a magis instead of a regular plain old sapien.
Ellen propped her head on her hand, staring at the orange and red leaf flicking at the window pane as she tried to recall their names. The names of the ones now living the life she dreamed of.
When she started middle school, she made a point not to befriend the magis children. They would all be gone soon enough, once they received their green and gold technote inviting them to be tested.
And though she knew her invitation would never come, it did nothing to stay the dreams—each night she saw herself presenting to a Safe Haven Clinic to have her gene blocker reversed, freeing her enhancements from their suppression.
And each night a different gift emerged. Flight, strength, speed. Each gift, each power, as incredible as the last. Ellen dreamed of using her awakened enhancements to defeat the rebels in the streets of New State, New York, until her aunt would break through her illusions with a call for breakfast, sending the scent of bacon to awaken her mind.
For three years she watched the magis children while they prepared for what was to come, a future in the spotlight of the world. A future protecting the ones like her, the normals. The weak. The homo-sapiens. Even the class fives, the ones who would become sidekicks, didn’t come back.
Now, on her fourteenth birthday, Ellen found herself in her first week of high school, staring mindlessly at the empty chairs they would have occupied while her teacher regaled what was left of her students with a tale of heroes lost.
A rumble vibrated through the classroom floor, pulling Ellen from her daze. Her teacher’s monotonous voice was interrupted by the shrill siren of the city’s emergency system. Ellen’s heart raced as she pushed aside the notebook covering her desk’s inbuilt screen, just as the first image appeared.
Red bolded font scrolled beneath the alternating pictures and videos of the aftermath of another attack. The rebels had leveled a Safe Haven Clinic, the feed showed a dust cloud billowing through the streets filled with people stumbling from the darkness, hugging their bloodied arms against their chests as if that would keep them safe.

SEVENTEEN HOMO-SAPIENS CONFIRMED DEAD IN ANOTHER REBEL ATTACK … HOMO-MAGIS SILVERLIGHT FREES CHILD FROM DEBRIS … “THESE BRUTAL ATTACKS ON THE HELPLESS MUST BE STOPPED,” COMMANDER CUMMINGS SAYS DURING PRESS CONFERENCE …

REBECCA BOSEVSKI is a speculative fiction author living on the east coast of Australia. Now that the Enchanting the Fey series is complete, Rebecca has plans to rapid release her Imperium Academy six book series over the next 18 months - that is if she can stop binge watching every Neflix movie made staring Noah Centineo. 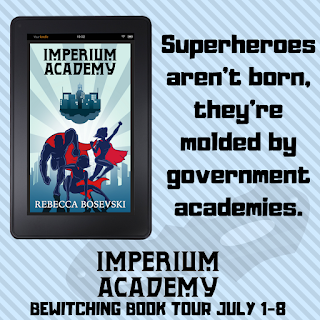