INTERVIEW WITH MARCELLA BURNARD (Enemy Within)

Well! Look who has come back to talk to us again. It's Marcella Burnard. Have a seat Marcella. We've got a few questions for you.
SC: Tell me a little bit about your main character of this book.
MB: Captain Ari Idylle used to command one of the sharpest Prowler crews in the Armada. Then she was taken prisoner by the alien Chekydran and accused of spying. They finally let her go, but no one, Ari least of all can figure out why. She's on a mission to get her command back and to prove the aliens don't control her. The problem is she's not sure they don't.
SC: Ah, the unknown.  Do you believe in the paranormal and if so, do you have an experience you can share?
MB: Yes. I read tarot and do a little mediumship for clients from time to time. Very early in my career, a client, let's call him Sam, called me and asked if I could connect with his dead father. I told Sam I would try. Blithely, sure that I'd get the usual thing - a father who'd died of natural causes - I went through my ritual of trying to find the person my client wanted to contact. I ended up with a man who'd died a violent, messy death. He'd shot himself in the head. Who wants to come out and ask someone they've never met, "Hey, did your father blow his brains out?" I didn't. I so tap danced around that, asking if his father had come to a violent end. Sam gasped and said, "Noooo!" I pulled up short, but this male presence was SO strong and the images so vivid. So I came at it another way. "Do you know someone who might have killed himself with a gun?" Again, Sam was horrified and said no. So I moved on. We talked about other issues and generally had a really good reading when about 45 minutes in, Sam gasped, "I know who it is! The man who committed suicide! It was the jeweler who designed and made our wedding rings." The dead man hadn't gone far. He told me what he wanted. So I said, "After he died, you did something for him. You said thank you." Sam said, "I did. After I heard, I took of my beautiful wedding ring and said, 'I'm sorry you suffered like that. Thank you for these beautiful pieces of work.'" I responded, "He wants you to know he heard, and he appreciates you thinking of him."
That was all it took. I was released to go on reading for Sam. Though we never did connect with his dad. Still. This is one of those experiences that still gives me goosebumps.
SC:  What titles are you working on now that you can tell us about?
MB: The second book in this series, Enemy Games is in final edits right now. It starts about a year after Enemy Within ends. It follows Jayleia Durante, who you meet in this first book. She's elbow-deep in a messy disease outbreak when her father vanishes. Since he was the director of a major spy agency, everyone who wants to know what he knew comes gunning for his only child: Jayleia. If she wants to save herself, her father and her people, she's going to have to redefine the terms enemy and ally.
The third book in the series, Enemy Storm, is draft complete and almost ready to turn into my excellent editor. I can't say too much here without spoilers. So let's just say the book exists and as soon as I iron out a few more wrinkles, I'll hand it off and move on to book four.
If you want to try out something slightly different, I have a hot SFR novella serialized on Radish. It is set in the same world as this series. It's called Enemy Mine. You can find it by title or by my name.
SC: Thanks for taking the time to stop in today. Let's take a look at your novel now.
﻿ 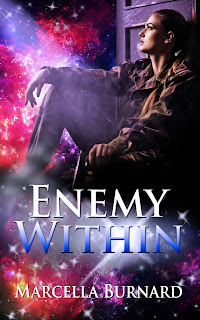 Enemy Within
Chronicles of the Empire
Book One
Marcella Burnard

Tagline: The military hung her out to dry. Captain Ari Idylle isn’t going to dangle.

Horrific torture in an alien prison torpedoed Captain Ari Idylle's military career. Stripped of command and banished to her father's scientific expedition to finish a PhD she doesn't want, Ari refuses to fly a desk. She intends to have her command back by any means possible, until pirates commandeer her father's ship, and she's once again a prisoner. Perhaps this cunning captor isn't what he pretends to be.

As far as Cullin Seaghdh is concerned, the same goes for Ari. Her past association with aliens puts her dead center in Cullin's cross-hairs. If she hasn't been brainwashed and returned as a spy, then she must be part of a traitorous alliance endangering billions of lives. He can't afford the desire she fires within him. His mission comes first. He'll stop at nothing, including her destruction, to uncover her true purpose and protect what is his.

“You know how to use that thing?” He nodded at the energy blade in her hand.
She swallowed outrage and awarded him a tight smile. “I am proficient.”
He grinned. “Ever fight for your life?”
“No,” she said, pleased her tone remained steady.
His smile deepened. “Then this isn’t so different. We aren’t fighting for your life, are we? We’re fighting for theirs.” He gestured at the knot of scientists.
Fear gripped her. She’d won matches. She had awards. She practiced religiously. Sure, she’d fought Chekydran with the might of an Armada Prowler at her disposal. But energy blade combat had always been a highly regulated sport, a dance with specific choreography designed to minimize injury. She’d never dueled for anything of more value than a bit of metal or a piece of paper to hang on her office wall. Swallowing hard, she eased into guard position.
Taking his time, he matched her stance. Ari did her best not to frown at the avid smiles on his men’s faces or at the effortless way he sank into position and crossed his blade with hers.
Her mind raced. She had to find a way to keep everyone alive. No matter the cost.
Captain Cullin Seaghdh tapped her blade with his, bringing her attention back to her predicament and his damnably cocky grin.
“You’re willing to trade your life for theirs?” he asked, his question pitched for her ears only, his smile gone and his gaze searching.
Troubled, she shook her head. “Are you intimating I have a choice?”
“Then fight.” He lunged.
Ari scrambled back, her parries thrown off by the aggressive attack. He didn’t press his advantage. That maddening grin flashed at her as he backed off. One step. Two.
Charity. She wanted to scream at him. She clamped her jaw shut and advanced the ground he’d offered.
“Out of practice?” He opened his defenses, daring her.
She accepted, ignoring the taunt. She had no intention of explaining that she’d had a hard time keeping up on weapons practice while a prisoner of war. Her attack wavered, but she pulled it together and forced him back a step to avoid her blade. He drew her in and then pushed her back, like a teacher hearing lessons. She ached to wipe that smile from his face.
“Point,” he said, nodding at her chest.
She glanced down. The bastard had sliced clean through her jacket and the buttons of her shirt. A shiver ran through her. One millimeter more and she’d be bleeding, probably on the floor. A slice like that one took enough control and skill to scare her.
“Lesson one,” he said. “Watch the man wielding the blade, but never lose sight of the business end.”
Lessons? Or something more? From the shock of physical awareness twining through her blood, she suspected they were no longer discussing energy blades.
Snarling to cover the grudging admiration at Seaghdh’s skill welling up within her, Ari charged him. He did not retreat. They locked, body to body, blade to blade. Feeling the leashed strength coiled in him, she knew instantly that she’d made a mistake, one that in any other circumstance would have been fatal. Scorched where their bodies strained against one another at chest and hip, she struggled to control the rush of yearning crashing her defenses. What was wrong with her?
She met his hooded gaze. Desire glittered in the golden depths of his eyes. Pleasure rocketed through her, almost painful in its intensity. She’d forgotten what if felt like to be appreciated as a woman, and the want in his eyes, shadowed by surprise, took her breath away. 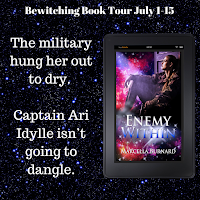 Marcella Burnard graduated from Cornish College of the Arts with a degree in acting. She’s a Tarot-reading, Third-degree Wiccan who knows far too much about space travel because she desperately wanted to be an astronaut when she grew up. Turns out she gets air sick. She wisely decided to write space travel instead. Marcella writes science fiction romance, urban fantasy, paranormal, and fantasy. If a story brings the weird, Marcella’s right there for it. She lives in Florida where she and her husband are outnumbered by cats. Marcella is actively involved in feline rescue in the Tampa Bay area and you can always find cat photos and videos on her Facebook page or on her Instagram account.