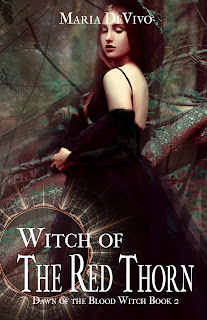 Witch of the Red Thorn
Dawn of the Blood Witch
Book Two
Maria DeVivo
Genre: Occult Horror
Publisher: 4 Horsemen Publications
Date of Publication: June 5, 2022
ISBN: 1644505614
ASIN: B09TGWNY76
Number of pages: 254
Word Count: 58k
Tagline: Three years after the Salem Witch Trials, a new evil awakens to terrorize an unsuspecting town.
Book Description:
The residents of New Haven Harbor, Massachusetts think they've escaped the madness of the Salem Witch Trials, but when a new Reverend is dispatched to their church to take over for their aging vicar, they soon realize the darkness is far from over. Dutiful Christian wife Barbara Flynn is immediately affected by the new pastor's presence. Intense thoughts and feelings she has never experienced before stir inside, drawing her close to the strange man.
When a series of grisly occurrences tear through the town, Barbara and the new Reverend join together to wade through the carnage. But on their journey, Barbara soon discovers she is part of a larger design - a plan that has been in the making since the dawn of time. As shadows loom over the quiet seaside town, the simple townsfolk grow frightened. Fear soon turns to anger as fingers point in every direction to snuff out the source who has once again brought witchcraft into their midst.
Can Barbara control the demons within her to assure the town's safety? Or will the mob force Barbara and the new Reverend to atone for the sinister magic devouring New Haven Harbor?
Reader Advisory: Witch of the Red Thorn contains violence, gore, Satanic rituals, and graphic sexual situations
Book Trailer: https://www.youtube.com/shorts/W6XsJ-Bksi0
Amazon

I didn’t realize how long we had been out in the clearing of the woods until Tansy’s screaming snapped me back into reality. It was almost like a dream—when you fall asleep into that dream world and your story just picks up in the middle of a scene, yet you have all the memory and knowledge of the world your mind has temporarily created for you. One moment we were walking out into the forest in the purest daylight to gather fresh flowers for the chapel, and in the next instance, it was pitch black and Tansy was pulling hard on my pinafore dress and howling at the top of her lungs for us to run.

“Run, Barbara! Run! Go!” she commanded as I twirled at the edge of the clearing, awestruck at the sight that lay before me—strewn in a circle lay twisted animal parts covered in leaves and muck and blood. Symbols arranged neatly with twigs, flower heads drenched in the crimson sticky blood, and black candles burned to their nubs protruded from the ground. Something about it enthralled me, bewitched me, and I stared hard at the tableau—unafraid and somewhat curious at the peculiarity of it all.

With one final tug of my dress and a shake to my shoulder, I locked eyes with my sister. Her words finally registered in my head, and her urgency struck deep into my soul: Run. Go. Now. We both took off running, my legs swiftly carrying me to presumed safety, my hands still clutching tightly to the cluster of Bellflowers I had previously picked (with no recollection of doing so).

When we finally made it to the edge of the Black Wood, the both of us slumped forward, hands on knees, panting hard for air to fill our lungs back up.

“I… I… I thought we were done with all of that! I thought that was passed us! I thought…”

Tansy’s upper body shot up with a sense of awareness. Her torso tensed and stiffened, and her face drew dark and contemplative. She furrowed her brow as if trying to piece some wild puzzle together or connect the dots to some great revelation. I saw it glittering in her soft hazel eyes, like words and images dancing in her mind, yet they were too fast for her to catch and put together. When it dawned on her, it was like a candle flame flickering to life. “Today’s the 20th, isn’t it?” she asked.

She stepped closer to me and lowered her voice. “It’s been almost three years, Barbara. Almost three years to the day that Martha Corey and the others were hanged in Salem. You know, the last of the trial judgments. Do you think it’s happening again? Do you think what happened over there is now happening here?”

“Hush your mouth, Tansy Wilkins!” I snapped back. “We are God-fearing women of our community. Peace-loving. We reject Satan and all his minions.” I paused after those words. For some reason, it didn’t feel right for me to say them. A creeping feeling of doubt entered my heart, but I pushed it aside. “Don’t you be putting that energy out into the universe,” I continued my admonition. “And for God’s sake, don’t go saying that around anyone else. You know how on edge everyone has been since all that business over there.”

“And stories they just are. The same ones I’ve been hearing, too. Nothing but silly ghost tales and monsters under the bed. Now shush, and don’t go putting wood on someone’s fire. Because the last thing we surely need is what happened there to infect us here. It’s still fresh. It’s going to take a little while for that wound to heal.” That much was true! I knew our town of New Haven Harbor would never be able to survive the horrors of Salem.

Her face darkened again at my words. It was obvious she wasn’t fully convinced by what I told her. I knew I wasn’t convinced myself, but I had to say the words to quell my sister’s suspicions. It would be a shame if she had opened herself to the hysteria of our neighboring town. Who knows what influence or bogeymen she might allow in?
Like a pinprick in the back of my mind, I could feel the scene in the clearing calling me—beckoning me to go and investigate. But I ignored it, and instead, I tried to convince my sister nothing nefarious was afoot.

They were playing at the bottom of the ledge where the witches were hanged, and no one has seen them since. Winnie says those little kids must have awakened something because strange things have been happening since then.”

“You know I can’t stand that Winnie Gordon. Never could,” I barked.

Tansy’s eyes went wild. “Barbara, stop that! How could you say that! Winnie has been my best friend since grammar school!”

“And pray tell, why is it that she needed to repeat her studies multiple times? Winnie Gordon is not the smartest of women, now is she? There are at least four, maybe five children in this town who bear the face of her sweet husband Jedidiah Gordon yet do not belong to Winnie herself…”

With a swift shot to the shoulder, Tansy huffed, “Barbara!”

I smirked from the corner of my mouth. “I speak nothing but truth, dear sister. And as for Winnie Gordon, I don’t think she could recognize truth if it slithered its way from between…”
She gasped again at my seeming vulgarity. “Barbara! Enough!”

I must admit, I too was taken aback by the images in my mind and the words that formed on my lips. It was no secret that Winnie’s husband was a fine catch for her. A brokered deal among their families to afford the best financial possible outcome for all parties involved. And it was no secret that Jedidiah Gordon was the desire of many of the women in New Haven Harbor, to which he heartily obliged. I envisioned all types of women in our town lying on their backs, receiving the full weight and girth of Jedidiah at once in a passionate ceremony, as if he were shapeshifter who could penetrate them at the very same time, all at once, thrusting and pulsating and rising and… I shook my head to rid myself of the thought, but the pinprick sensation was still needling its edge in the back of my head, sending electric waves down my spine.

I gave Tansy the bouquet of bluebells and instructed her: “Take these back to the chapel.

Someone will probably be wondering where we are and why we’re taking so long. Not a word of this, though. To anyone. Not even Winnie Gordon, you understand me. Someone is clearly playing a cruel joke, trying to get everyone excited and spooked for the upcoming anniversary. I’m going to go back to the clearing to tidy up so no one else sees it. I’ll be quick and come back with more flowers. Say I was unhappy with what was out there and wanted prettier ones.”

Tansy gave a quick nod and went on her way. I turned on my heels and headed straight for the clearing—straight back to the scene of grisly ritualistic murder, straight back to the scene that seemed to call to me, that drew me in. On closer inspection, I realized the twigs were arranged in the shape of a makeshift circle with the five-pointed star in the center. At each point of the star, a black melted candle was stuck into the earth. The waxy pools at their bases held them in place. A squirrel’s severed head was in the center of the star and there was blood—so much blood— adorning the center and outside of the circle.

But the blood sings.

I knelt at the end of the ground altar, entranced with the precision at which it was constructed and thought: Who could have done this? Why did they do this? What is the meaning behind it all? But my internal questions were drowned out by the song of the blood and replaced with the only thing I could describe the feeling as—knowing. The scene was suddenly beautiful to me, and a wave of guilt tumbled into my soul. I should not feel this way. I should not feel this way…

Yet something in me did. 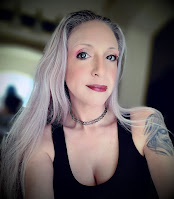 About the Author:
Maria is the Author of the Amazon bestselling and award-winning series The Coal Elf Chronicles, the YA psychological horror series The Altered Experience, and the NA Urban Fantasy series The Aestrangel Trinity.
When not writing about dark fantasy and horror, she teaches Language Arts and Journalism to middle school students in Florida. A lover of all things dark and demented, she takes pleasure in warping the comfort factor in her readers’ minds. Just when you think you’ve reached a safe space in her stories, she snaps you back into her twisted reality.
Website: https://www.mariadevivo.com/
Facebook: https://www.facebook.com/mariadevivoauthor
TikTok: https://www.tiktok.com/@authormariadevivo
Instagram: https://www.instagram.com/authordevivo/
Twitter: https://twitter.com/AuthorDeVivo
Youtube: https://www.youtube.com/c/MariaDeVivo
Newsletter: https://bit.ly/MariaNewsletter
Amazon: https://www.amazon.com/Maria-DeVivo/e/B00CIAYHKY 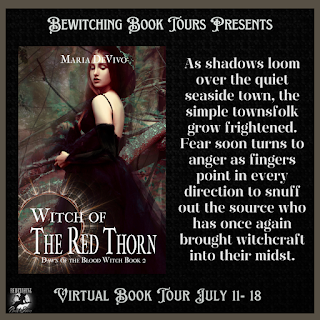