INTERVIEW WITH MARIA DeVIVO (WITCH OF THE BLACK CIRCLE)

How was your weekend? Keeping away from the news? Good idea. Let's take a few moments to sit and chat with author Maria DeVivo who is here to talk about her novel DAWN OF THE BLOOD WITCH Book One.  Welcome, Maria.
SC: Tell me a little bit about your main character of this book.
MD: Josephine “Joephie” Turner is the main character of Witch of the Black Circle. The audience finds out rather quickly that her mom always says that she was cursed by a witch. Mother moves them constantly from town to town so that Joephie never gets too settled in one place, and too comfortable around the wrong people who could be potential bad influences on her or demonic cult members trying to get her to join their coven. It’s rather laughable to Joephie, who, by now, at 17 and a senior, is just riding it out until she graduates high school and can move as far away from her mother as possible. And every town they live in, her mother forces her to join the local Youth Ministry so as to walk the straight and narrow. But this time is different. At the First Northport Assembly of God in Northport, Long Island, New York, Joephie encounters a group of occult-sensitive teens, the town’s infamous baddie, and a mysterious youth minister, who all crack open the secrets of her true nature.
SC: Do you believe in the paranormal and if so, do you have an experience you can share?
MD:  I’ve always been attracted to the paranormal. For as long as I can remember there’s always been beauty in the darkness and things bumping around in the shadows. I’ve had/have my fair share of paranormal experiences, but if I told you, then I’d be giving away a lot of plot points in my series! One thing I can share is this: my sister and I are inherently connected. We talk to each other (without talking), we know things, we’re very emotionally sensitive to each other. We live in different states and are 5 years apart. People would say, “oh, it’s the sister thing.” But it’s more than just that because we’re noticing that my 13 year old daughter is starting to connect to us as well. I guess I have my very own built-in coven. 😊
SC: Thanks so much for sharing that with us. Sisters can be very intuitive. What titles are you working on now that you can tell us about?
MD:  The Dawn of the Blood Witch series is a planned series of ten novels. Witch of the Black Circle is the 1st book. The second novel, Witch of the Red Thorn, is due to release this June. The really cool thing that I’m enjoying about this series is that books 1 – 9 are standalones, but connected. If you wanted to read Book 4 first, you wouldn’t be missing anything. But there are, and will be, easter eggs throughout each book to give hints of the past and things to come. The only one that MUST be read last is Book 10, but that’s a long ways away!
SC: It'll come sooner than you think, lol. Thanks for joining us today. Let's take a look at your novel now. 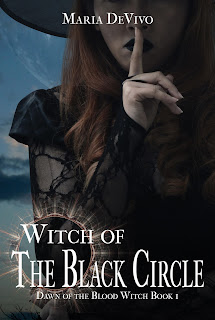 Witch of the Black Circle
Dawn of the Blood Witch
Book One
Maria DeVivo
Genre: Horror
Publisher: 4 Horsemen Publications
Date of Publication: March 7, 2022
ASIN: B09NB1G11Y
Number of pages: 217
Word Count: 64k
Tagline: When it comes to witchcraft, it's never just a teenage phase...
Book Description:
For as long as she can remember, high school senior Joephie Turner's mother has told her she is cursed by a witch. As she settles into her new hometown of Northport, Long Island at the height of the 1980s Satanic Panic era, Joephie is accepted into a circle of friends obsessed with the occult. Demonic messages on cassette tapes, shady youth group leaders, and passionate sexual encounters push the teen into a thrilling world that lends a deeper meaning to the proverbial mantra: "sex, drugs, and rock and roll." Until it all goes wrong.
A decade later, haunted by nightmares of cults and rituals, formidable burgeoning witch Joephie pieces her memories together in search of answers about the small group of suburban teens that meddled with dark forces. As an adult, Joephie will have to decide what, or who, she is willing to sacrifice from her past in order to claw her way back to sanity.
Inspired by true events, Witch of the Black Circle is a deliciously wicked and nostalgic journey through time where the lines of reality and the supernatural blur. Content warning: satanic rituals; sex; graphic violence; language; drug use
Amazon

Dan reaches over to his bag and pulls out his math book. In the front pouch, I notice a small novel with a black cover. “Hey,” I say, nodding my head in the backpack’s direction. “Whatcha reading?”

“Uh, nothing,” he answers, shrugging his shoulders.
I put out my arms and tap my fingers together like a baby grasping at something. “Lemme see it!”

“Nah. It’s really nothing,” he repeats, but he’s unconvincing, and it makes my curiosity burn a hole in my brain.

Kit’s curiosity is piqued as well, so she stands up and moves behind the chair with the backpack. “Now, now,” she sings. “No secrets here, Dan!” She grabs the bag from the chair and pulls out the book. “The Satanic Bible?”

Dan quickly shoots up from the chair, snatches the book away from her, and cradles it to his chest as to hide the cover from us. “Shhhh…” he admonishes as he looks side to side, assessing if my mother was in the vicinity or not.

I hold out my hand again. “What are you reading that for?” I ask. “Give it here.”

Reluctantly, he turns the book over to me, and I examine the cover, the spine, and the back like an investigator studying a piece of crime-scene evidence. Only, I don’t have on rubber gloves. I’ve known about this book. Heard about it. Knew the story of the author, Dr. Anton LaVey, and his Church of Satan. Practically, every youth ministry I had attended had mentioned the evil of this piece of literature at some point in time: If you even look at the book, you can be possessed. Being in its presence alone can have a profound effect on your heavenly soul. Dare not open or read the pages for fear of infiltration by a powerful demonic force. But as I actually hold the book for the first time in my life, I feel … nothing. No fear. No wonder. No spooky taboo. I press the book in my palms trying to feel for any ‘other-worldly’ vibrations or indication that if I open it up I will be damned to hell. But no. Nothing. Zip. Zilch. And more lies and deception from my past teachers come into clear view. “Dude. It’s just a book.”

“Yeah, I know it’s just a book,” he huffs, grabs it from me, and shoves it back into his bag.

The three of us sit back down in silence for a few minutes.

“Why’d you get it?” Kit emphasizes.

Dan looks behind him and scans the kitchen again. Then, he moves his upper body slightly across the table as if to beckon me and Kit to huddle in. We oblige him and he speaks in a soft, hushed tone: “Thomas. This guy from my school. He got the connection with that Ricky kid and the Knights of the Black Circle.”

Dan glares at me and holds up his arm revealing the faded black circles drawn up and down his arm, over and over and over. I had thought they were just silly drawings borne out of boredom, but…

“They wanted him to read the book and know some stuff before they accepted him,” he continues. “Thomas said he could probably get me in, too, and told me what passages to study and shit.”

Kit’s pretty eyes widen, and her bangs touch her eyelashes again. “He knows the Acid King?”

A sneer forms on Dan’s lips and he nods. “Uh huh.”

“Wait,” I protest. “What are you talking about? Who are the Knights of the Black Circle?

“The Knights…” Dan explains, “they’re a group. Local. They do stuff. They know stuff.”

About the Author:
Maria is the Author of the Amazon bestselling and award-winning series The Coal Elf Chronicles, the YA psychological horror series The Altered Experience, and the NA Urban Fantasy series The Aestrangel Trinity. When not writing about dark fantasy and horror, she teaches Language Arts and Journalism to middle school students in Florida. A lover of all things dark and demented, she takes pleasure in warping the comfort factor in her readers’ minds. Just when you think you’ve reached a safe space in her stories, she snaps you back into her twisted reality.
Newsletter: https://bit.ly/3swwTaM
Website: https://www.mariadevivo.com/
Twitter: https://twitter.com/AuthorDeVivo
TikTok: https://www.tiktok.com/@authormariadevivo
Instagram: https://www.instagram.com/authordevivo/
Facebook: https://www.facebook.com/mariadevivoauthor
Amazon: https://www.amazon.com/Maria-DeVivo/e/B00CIAYHKY/ 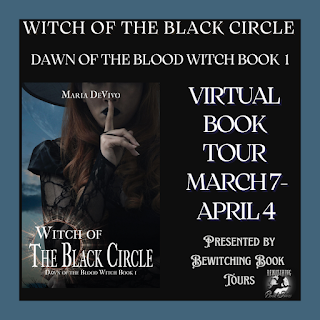