Normally I'd be asking everyone how their kids are settling into school, but this isn't a settle kind of year. Maybe you're home schooling. Maybe you need a break. Here's a little escapism. Author Andie M. Long dropped in for a little chat.

AML: Noah is the vampire guitarist in the band The Paranormals. They've entered a reality show competition to try to win the title of Britain's Best New Band and a recording contract. At the auditions, Noah bumps into his ex-girlfriend Stacey who is also entering with her band. Stacey has always felt he dumped her for his friends but that's not the truth at all. Noah will have to decide what's more important to him as the book goes on.

SC: With a band name like that, I probably don't have to ask you this. Do you believe in the paranormal and if so, do you have an experience you can share?

AML: I definitely think there's more than can be explained. I see white feathers a lot and they seem to appear whenever I'm doing something 'on the right path'.

When my son was little my mum caught him talking to someone who wasn't there. When she asked who he was talking to he said Ron. That's the name of her father, my grandad. He then pointed him out on a photo on her window ledge even though he'd never been told who they were. He was two at the time.

SC: It seems that children have that ability. What titles are you working on now that you can tell us about?

AML: At the moment I'm writing book 3 in The Paranormals series, We Wolf Rock You, and I'm having a lot of fun toying with Rex who's a shifter. He needs teaching a few lessons about love and romance! His book is out at the end of September.

SC: Well we'd better let you get at it. Let's meet The Paranormals now. 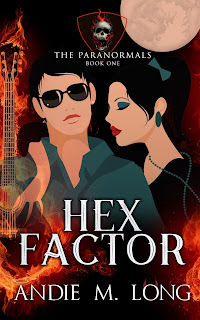 Vampire guitarist Noah is about to face the music…

At auditions for Britain's Best New Band things get awkward when Noah bumps into his old high school sweetheart and sassy ex. The one he dumped to form his band, The Paranormals.

Witch Stacey has never forgotten Noah’s betrayal. Determined to charm the judges with her own band and win the recording contract, it will be the perfect revenge on her ex.

But as the competition heats up, so does the chemistry between them, until one of the show's presenters going missing threatens everything.

With ghosts on the loose and bands who will stop at nothing to win, can Noah and Stacey survive the competition and claim each other's hearts? Or are they doomed to be just another cliché of Hex, blood, rock and roll?

We were waiting in turn for our audition for Britain’s Best Band, a reality show that could take unknowns and send them stratospheric.
Being a top rock band was our dream and had been for years.
“Are you not cold?” Zak leaped from foot to foot rubbing his hands.
“Idiot, I’m always cold, I’m a vampire.” I eye-rolled him. He was off his game today and I could hazard a guess why. The guy was knackered from his extra-curricular activities.
“Well, you must be cold, because you’re not able to put your furry coat on.” Zak pushed at Rex.
Rex didn't move, despite the shove. “Even when I can’t have my fur on the outside, it warms me on the inside. PS, if you push me again, I’m going to knock you the fuck out.” Ever the alpha wolf, Rex growled at Zak. “There are loads of women here, go warm yourself up by screwing a few of them. Get some extra credit.”
Zak's shoulders slumped. “I’ll not stay awake for the audition if I do that. I need to have a word with Abaddon, seriously. My quota is too large. I could hack it when I was eighteen, but I can’t now.”
Roman, our lead guitarist, took a swig from the bottle of scotch he seemed to have permanently attached to his hand. “I feel lovely and warm.”
“Piss off, Satyr. That’s because your bloods almost 100% proof.”
“Can you keep it down, Zak?” I narrowed my gaze at him. “I don’t think we should be broadcasting our paranormal status to the two thousand humans we’re sharing the queue with.”
“Excuse me?” A slim blonde tapped Zak on the shoulder. She was wearing a fluffy blanket around her shoulders. “You can share my blanket if you like?"
Zak ran a hand through his hair.
“Oh look, he's responding to the female. The penis flytrap is about to ensnare another victim.” Rex scoffed.
Roman almost choked on his mouthful of whisky. “Penis flytrap. That’s fucking fabulous.”
Zak gave us all a withering glare, then turned back to the blonde. “Thanks, doll. I’d like to take you up on your invitation to share your blanket another day, if I may? Perhaps you could give me your phone number?” Then he yawned. It didn't put the blonde off though. She gave him a beaming smile and her contact details. 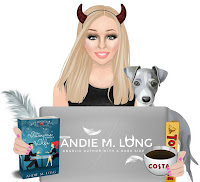 Andie M. Long is author of the popular Supernatural Dating Agency series amongst many others.

She lives in Sheffield with her long-suffering partner and son.

When not being partner, mother, writer, or chocoholic, she can usually be found on Facebook or walking her whippet, Bella. 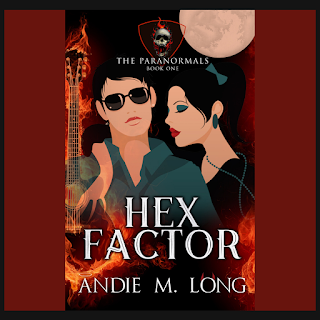