Well, here we are. I've always considered September the beginning of the calendar, rather than the third quarter. I guess it's that whole school thing that took over a lot of my early life.
Today we have author Dierdra Drake joining us for a brief chat.


SC: Tell me a little bit about your main character of this book.
DD: The main character in my story is Priscilla Forester, and she’s a 500’ish-year-old Elf who resides in modern Houston, Texas. I’m not giving a specific age because, as you find out in the story, there is some secretiveness around events that happened very early in her life.


In my world, all the Elves were cursed to live on this Earth plane of existence, the gates to the other realms shut to them as punishment. The curse is pretty intricate, but the short version is that they’re essentially what Humans would call Vampires, even though they find that word insulting. But Priscilla is more than just a regular cursed Elf, she’s called ‘twice cursed’ because she has some other abilities that I think people will enjoy reading about. Even beyond that, there’s far more to her, but that gets into things she isn’t even aware of yet.
The first book in the series is largely an introduction to the circumstances the Elves find themselves in, getting to know Priscilla and some of the other important characters, and also it is a lot about seeing her grow into the beginning of some acceptance about things she doesn’t like about herself.


SC: Do you believe in the paranormal and if so, do you have an experience you can share?
DD: I absolutely believe in the paranormal, and I’ve had many, many experiences with it. The earliest that I can recall is from an incident when I was about four years old. I awoke in the middle of the night screaming that my aunt was hurt and needed help. It turned out that at the same time, my aunt had just been in a car accident so bad they had to cut away the vehicle wall to get her out. Thankfully, she survived it with only minor injuries, but it was only the beginning of those kinds of experiences for me. I even spent some time working as a professional tarot reader in my early 20s.


SC: What titles are you working on now that you can tell us about?
DD: Books two and three are already written, so I can definitely disclose that those two are already in various stages of production with my publisher. Book two is called Well Deserved Wrath, and book three is called Memory of Betrayal.

However, I can also tell you that I started writing another book in the 2 year gap which takes place between book 1 and book 2. Depending on how quickly I finish that book, it may actually bump the rest up by one… but there are production timelines and things that could get in the way. If not, then it will probably come out after book 2 as an in-between book.


SC: That's wonderful news for your readers. Thank you for spending some time with us. Now let's look at your book. 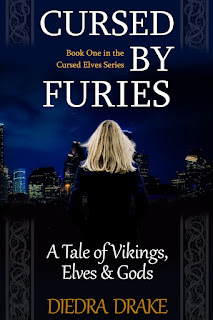 Cursed By Furies
A Tale of Vikings, Elves, and Gods
The Cursed Elves

Tagline: What if the myths were all real?

1000 years ago the Elves nearly destroyed their species through war. As punishment, their ancestors cursed them and trapped them on the Earthly plane.

Priscilla Forester is a 500-year-old Cursed Elf, with abilities far different from most. She knows there is some secret about her origins, but has given up thinking she will ever discover the truth.

However, Fate was only waiting for the right moment to reveal its secrets. As Priscilla and her lovers battle against warring Elf Houses, her true nature begins to emerge, and it is more than anyone had bargained for.

Mitchell parked in the lot, careful to stay out of the immediate line of sight while Raymond filled up his tank.
He replaced the pump nozzle before entering the store to get his chips and pay for the gas. Another car pulled up, and the driver also went inside. A few more minutes passed, and Mitchell started to grow concerned.
Raymond didn’t normally dawdle, and there weren’t so many cars around that there should be a big line. Maybe the clerk was having problems with his register or…
A shot rang out. Then another.
Mitchell’s heart sank and fear surged through him as he nearly tore the door off getting out of the car. He was inside the store in a blink and took stock of the situation in seconds. Raymond lay on the floor bleeding from his side, the red pool growing quickly. The clerk's body hung slumped over the register counter, blood pouring out from his chest.
The shooter’s eyes darted back and forth between the two victims, his breathing chaotic as he rubbed his fingers through his hair and pressed his palms to his temples. His eyes wide as he stared at the bodies and the blood. He didn't immediately realize anyone else was standing there. When he finally noticed Mitchell, it was but a moment before the shooter’s neck was broken and he collapsed next to where his gun had fallen.
Mitchell dashed to the automotive aisle and returned with a pack of terry cloth rags and duct tape. He ripped open Raymond’s shirt, tore one of the cotton rags out of the bundle, and started mercilessly packing the wound. Raymond screamed in agony for a few seconds, then his body became limp as he lost consciousness.
“Sorry Ray, it’s better this way," Mitchell mumbled as an apology.
He put his fingers underneath the bleeding side of Raymond’s body and felt around looking for an exit wound. Sure enough, the bullet had gone entirely through. With one hand Mitchell shifted Raymond onto his side, then shoved another piece of rag into the exit wound. When he rolled him back over, he noticed the fabric on the front was completely saturated and blood was pouring out of the injury again.
“Dammit. Something’s bleeding inside." He took a shaky breath. “Shit!”
He wiped off as much blood as he could to dry the skin, folded a piece of cloth like a bandage, and duct taped it over the opening in his flesh. He repeated the process on the back.
Mitchell looked around and realized he needed to lock down the scene. He stood and flipped the sign on the front entrance to 'Closed,' then hit the nearby light switches so the interior went dark.
He returned to Raymond, lifted him effortlessly, and carefully carried him outside to where he’d left his vehicle in the parking lot. He managed to open the passenger door and put him in the seat, then reclined it back to keep his body at an angle. As he was about to close him in, he noted the seat belt. With a last-minute idea, Mitchell ripped it from the wall of the car and started sliding it under Raymond.
Raymond regained consciousness for a moment, took one look at Mitchell, and began yelling in terror while pulling away.


Mitchell sighed as he realized his fangs had been out because of all the blood and stress. Another mistake. His superiors were going to kill him. He tightened the belt over the wound like a tourniquet, and the sudden pain made Raymond pass out again.

Diedra Drake is a life-long student of mythology and history, with a particular interest in the ways that different cultures tell the same stories using name variations. She is competent in classical Latin, and enjoys reading the classics – particularly Homer, Plutarch, and Shakespeare. For relaxation, Diedra loves to crack open a new historical romance novel or binge a new series on streaming. After a couple of decades being a business owner in the technology industry, she decided to explore her other interests through the creation of a mythic fantasy romance world. She lives in Central Texas with her family, which includes a small cat colony and a couple of dogs, and tries to ensure she gets a daily serving of ice cream for continual inspiration.