SPOTLIGHT: TAKEN BY A HIGHLAND LAIRD by SKY PURINGTON

We're welcoming Sky Purington back today, as we take a look at book two in the MacLomain Series. 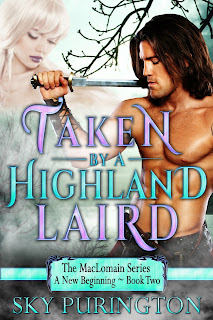 The last thing Lindsay expects when she visits Milly’s home in New Hampshire is to be thrust back in time to thirteenth century Scotland days before the Battle of Stirling Bridge. Worse yet, captured by the English. Using her wits and ability to wrap men around her little finger, she survives long enough to be rescued by a band of Scotsmen. One of them, a rigid Highland chieftain determined to protect his country, rarely lets her out of his sight. A man, as it turns out, who is immune to her allure…or so it seems.

From the moment Clan MacLomain decides to save Scotland’s history, Laird Conall Hamilton knows he needs to be part of it. What he does not foresee is a beautiful twenty-first century actress crossing his path. More so, that they end up caught in an obligatory kiss that sparks an infamous battle. A kiss, as Fate would have it, that takes them on an adventure through time to both the Action at Earnside Skirmish and the Action at Happrew.

Joining first Sir William Wallace then King Robert the Bruce, Conall and Lindsay end up on a journey that will leave neither unscathed. Though determined to keep each other at arm’s length, desire simmers, reeling them ever closer. Inner demons are faced as they navigate a powerful connection neither saw coming. A bond so intense and passionate that it might very well help them defeat the enemy and save a nation.

“You could slow down some,” she muttered under her breath as none other than Laird Conall Hamilton yanked her through the woods toward Stirling Bridge.
“Not if they are to believe you are my prisoner,” he stated blandly, his hold on her wrist an unbreakable vice grip.
Naturally, ever the hero, he had volunteered to bait the English alongside her. At least six foot five with broad shoulders and endless muscles she was no match for him physically. But maybe mentally. Time would tell. Lindsay sighed as she stumbled along and put up a believable struggle. The truth was, Conall was as smart as he was strong and that, amongst other things, was getting on her nerves.
Sure, being flung back in time to days before one of the most famous battles in Scottish history was daunting, but she had handled it. She had worked her magic with Hugh Cressingham then even John de Warenne, the Earl of Surrey. As she was so good at when it came to men, she had been what they needed her to be. But then that’s what she did for a living.
She acted, and she did so very well.
Again and again, over and over, no matter where she was.
“The bloody Sassenach are watching you, lass,” Conall muttered. “They want you back.”
“That’s what we’re counting on,” she reminded, nearly tripping on a root.
Fog drifted in thick waves through the damp, pine-scented forest, obscuring far more than she would like. It hid things from her. Kept something from her. Up until this point, she had been strong but something about that, not being able to see beyond the fog, sent shivers through her. A chill and dread that, of all things, had her clutching the ring in her pocket for comfort.
Guidance.
Protection.
But why would she feel that way?
Even as she shook her head against the idea, she slid the Claddagh ring on. Unfortunately, it didn’t affect her fear in the least. If anything, it made her feel more vulnerable. Or was it really the ring? She frowned as her eyes went to Conall.
“So what is your plan once we get close?” she said. “Because I thought I should be the one to put on the show seeing how I am a professional actress and you’re ah…well, rather transparent.”
“I suspect you will put on a show,” he acknowledged, clearly not all that impressed as he pulled her along. “I’ll be curious to see how well you perform.”
Like Adlin and Bryce, he said ‘you’ instead of ‘ye’ when speaking with her. Evidently, it was how medieval MacLomains made it easier for twenty-first century women to understand them.
“So why are you so upset?” Lindsay arched her brows, about over his attitude given their current circumstances. “Might it be because I spent the night in William’s tent?”
Conall scowled. “Why would I care if you spent the night in his tent?”
Lindsay rolled her eyes. “Because you have been smitten with me since the night all of you saved me from the English.”
“Is that what you think?” His voice remained bland. “Or could you have misconstrued my vigilance in protecting a lass who tempts her own demise at every turn as affection?”
She dodged another root, growing more irritated by the moment. “So ending up in the enemy’s camp against my will was tempting my own demise?” She inhaled deeply at his gall. “Are you serious?”
“Ending up in Cressingham’s arms was tempting something,” he returned. “And God only knows what you were up to in the Earl’s tent.”
She narrowed her eyes at the back of his head. They might have met a few days ago, but this was the most he had ever spoken to her. Where she had hoped they might be able to speak sooner, now she was of the mind he had spared her.
“Why don’t you say what’s really on your mind, Conall,” she said. “Because I highly doubt it has anything to do with me being in anyone’s arms but William’s—”


That’s all she managed to get out before he whipped her around and backed her against a tree. Half a breath later his lips were on hers.

Sky Purington is the bestselling author of over thirty novels and several novellas. A New Englander born and bred who recently moved to Virginia, Sky was raised hearing stories of folklore, myth, and legend. When combined with a love for nature, romance, and time-travel, elements from the stories of her youth found release in her books.

Purington loves to hear from readers and can be contacted at Sky@SkyPurington. Interested in keeping up with Sky’s latest news and releases? Either visit Sky’s website, www.SkyPurington.com, subscribe to her quarterly newsletter or sign up for personalized text message alerts. Simply text 'skypurington' (no quotes, one word, all lowercase) to 74121 or visit Sky’s Sign-up Page. Texts will ONLY be sent when there is a new book release. Readers can easily opt out at any time. 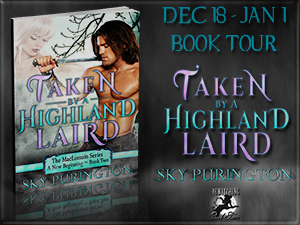